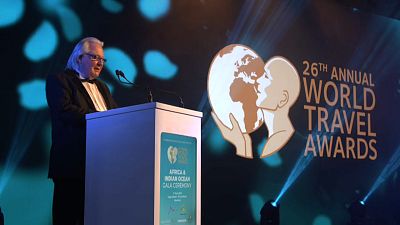 This event is one of many regional galas throughout the year - others include North America and the Caribbean, Latin America, Asia and Oceania, Middle East, and Europe. The winners of these ceremonies then compete in the world categories at the World Travel Awards Grand Final in November.

At the night of the gala in Mauritius, hundreds of travel and tourism representatives from across the region gathered to celebrate the best of their industry.

Categories included Mauritius' Leading Beach Resort 2019. The winner was none other than the hosts of the ceremony - Sugar Beach Resort.

The Indian Ocean's Leading Beach Destination went to the Maldives.

Mauritius won the Indian Ocean's Leading Adventure Tourism destination, among a few others.

Euronews spoke to Graham Cooke, the founder of the awards who said the ceremonies help showcase the best of the business:

And I think in most cases, its been proved that it can increase business, competitiveness… and obviously do a lot for the island.”

Tourism is going to be the number one industry in the years to come.

For Mauritius, these awards are part of a plan to expand its tourism industry. Ivan Collendavelloo, the deputy prime minister of the country, said it was a step in the right direction:

“This is important. We had, last year, the Africa Energy Forum for instance, which was on the whole of the west coast of Mauritius. So, that sort of event brings Mauritius on the world map… and that’s what we want to achieve.”

Sugar has been the dominant industry on the island for centuries. But Mauritius looks to grow its visitor numbers to nearly two million a year and make tourism a central part of the economy. The country's tourism minister has high hopes:

“Tourism is going to be the number one industry in the years to come, so we look up at it as a very important sector of the economy.

Today, as you can see, we have lots of activities at sea. We are encouraging the tourists to go out of the hotels, to go and meet people and understand what Mauritius is all about, because there’s a lot of vibrancy in the country, a lot of things happening in terms of religion and cultures."