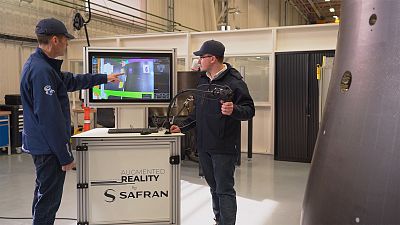 Skills are the currency of the 21st century and, together with education, they are crucial factors shaping the future of our societies and economies. But, are your skills up to date? In this episode of Real Economy, we look at how the working world is changing and what people in Europe are doing to keep up with it.

The evolution of the world of work

There are four main reasons why working society and industries are changing. They are:

The World Economic Forum estimates that by 2022, more than half of employees will have to upskill or reskill, meaning that many workers will have to either gain additional expertise relating to their position or learn brand new skills entirely.

Fabrice Bureaux works as an assembly line operator at a factory in Le Havre that makes nacelles; housings for engines and fuel on planes. When the method of construction evolved, Fabrice volunteered to be taught new skills.

“Before, we used to perform this operation manually. In the end, it was really physical and very hard, so it would take roughly three-quarters of a working day. Now, with the drilling robot, it is done in a quarter of the day, and it is really precise,” he said.

“The factory of the future”

One major element that has caused a change in working society across different industries is the introduction of new technology. Companies are constantly looking into how new computer programs and machinery can help them to reduce costs and improve efficiency. But introducing this new technology into an existing workplace is not always an easy task.

“The transition must be positive, and to be positive it has to be prepared. In the factory of the future, the industrial tool should be at the service of the workers. This is what will allow us to be more efficient and improve our business,” said Cédric Halé of Safran Nacelles.

While, in most cases, the introduction of new technology in the workplace can improve a business’ productivity, it begs the question: what does this mean for human workers?

“This new way of working will allow this company to deliver 2,000 new engines in three years, instead of 15 years. However, it means that machines and algorithms will be tasked with that work, which raises the question of the evolution of the role of humans at work.”

Many workers see the introduction of this new technology as less of a worry and more of an opportunity to learn new skills that could benefit them when it comes to future employment.

Nicolas Lepape is a project manager of research and technology at Safran Nacelles, but he has now taken up a role as mentor to Mickael Lebaillif, an apprentice engineer at the National Institute of Applied Sciences of Lyon (INSA).

“The idea behind these new jobs is so I can say: ‘I am an industrial engineer, so I manage mechanical and production aspects, amongst others, and I have skills across all digital areas’,” Nicolas said.

Mickael is currently working with virtual and augmented reality, technologies which are not yet commonly used in most industries. He hopes that this will give him an edge when it comes to applying for jobs in the future.

He said: "It opens doors for us and we are more employable because we already know these technologies."

New technologies are evolving constantly and rapidly. So how do companies match workers' skills with the future needs of the labour market? Alban Guyot, general manager at Entreprise du Futur, is currently working with a network of 19,000 employers who are looking at how to answer that question.

He said: "It is one of our biggest questions, and we do not yet have an answer to it. But this is because there are many topics that are being tested in companies, about how technology will tackle topics like customer proximity, innovation, international development and understanding clients’ expectations. All these topics that are emerging are potentially creating new jobs."

The EU unemployment rate in February 2019 was 6.5% - the lowest it has been since monthly reporting began in 2000. Approximately 190 million people around the world are unemployed, with 64.8 million of those being young people.

300 million workers live in extreme poverty, on less than €1.70 per day and two billion people make their living in the informal economy - a part of the economy that is not taxed or monitored by governments.

These are all major challenges that must be overcome, and it is estimated that 344 million jobs will need to be created by 2030 in order to address unemployment.

Euronews' business editor Sasha Vakulina met with Marianne Thyssen, EU Commissioner for Employment, Social Affairs, Skills and Labour Mobility, to ask her how these challenges can be met.

She said: "I think one of the main challenges is the skills of the people. Almost 70 million people in Europe are lacking basic digital skills. And this is not okay. We see a lot of vacancies that are not filled in and what we really have to take care of is that we can skill our people better, more, and making skills, education and the training often also more relevant for the labour market. I always say, when it is about skilling of people, 'employability' – is not a dirty word. We have to take into account that people, after they finish school, they have to come on the labour market and this transition should be as smooth as possible."

But how do we ensure that workers are getting those skills? According to Marianne Thyssen, people should not stop once they have learned the necessary skills. She believes they should continue learning more skills throughout their lives.

"We have to ask citizens to look at their skills, to make an effort, of course. We also have to ask them to be ready for life-long learning. I think we cannot say in the years ahead of us, we go to universities, or we go to other schools, and we have our certificate and then it's done. No! We have to skill, to reskill, to upskill. And we will be busy with skilling all our life. But from the side of, let me say the government, the public authorities, we also have to do our bit and we must make sure that there are good offers available," she said.

The European Commission currently promotes its 'Upskilling Pathways', an initiative designed for adults with a low level of skills, to help them achieve employment across various sectors. It aims to address the 70 million Europeans who struggle with basic reading, writing, mathematics and using digital tools.

Sasha Vakulina asked Marianne Thyssen what else the EU can do when it comes to globalisation and global supply chains.

"We must be ready as Europeans to take the lead and to try to export not just our products and services, but also our values. I think many people from somewhere else in the world, they look at Europe because they know it is a good quality of life here. And we must make it possible that people also in the future have a good quality of life. So what we have to do in our trade agreements – that are about services and products and global value change – we must make sure that we have also agreements on environmental protection, that we have also agreement on employment and social security, about dignified working conditions and so on," she said.

How to get older workers back into the EU's labour market