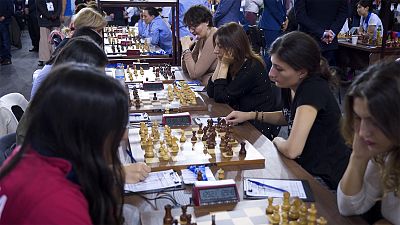 The 43rd World Chess Olympiad has been held in Batumi, Georgia. Apart from being a hot tourist destination, the city hosts major sports and cultural events. For 12 days, chess legends and new talents brought their best moves to the board in order to win the highest distinction, a medal at the Olympiad.

For the Georgian Chess team, this was a unique moment. Nino Batsiashvili is a chess grandmaster and member of the team that won the gold medal in the Women’s World Team Chess Championship in 2015. The 31-year-old player feels honored, because the chess Olympiad was hosted by her hometown.

"This is the first time that Batumi has hosted such a big event. It was very important for us to play well. This was a great tutorial, because we always pay attention, we take lessons from other players. Of course we share our experiences with our foreign colleagues at some point. A chess player must be trained on a daily basis. We need to find new combinations, new ideas and tactics in order to use them in future competitions," says Batsiashvil.

In the Womens' event, Georgia won bronze. Beyond any doubt, China proved to be the star of the event as they won two gold medals, in the open and in the women’s section. But let’s see the 43rd World Chess Olympiad in numbers:

"You have to be really quiet in the hall and no cellphones are allowed. You also have to be very patient if you want to know who the winner is, because some matches last up to six hours. Chess demands concentration, a good strategy and a clear mind," reports euronews' Apostolos Staikos

At this year’s World Chess Olympiad, a team of filmmakers started shooting ‘‘The Encounter’’. It is a documentary about the reunion of the world-beating Soviet Women’s Chess Team from the 1960s to the 1980s. The four Georgian female players met again after almost thirty years.

We had the chance to meet Nona Gaprindashvili. She is the first woman to be awarded the FIDE grandmaster title, and she is a five-times world champion. While she remembers the good old days, she realizes that new chess players are expected to perform in a totally new environment.

"The computer has changed everything and nowadays the audience prefers to sit by a computer and watch the matches online. It has stolen our viewers from the chess halls. In the past, our tournaments and competitions were broadcast in cinemas and theatres and they all were always full, people were even standing outside the venues and waiting for the results;" says Gaprindashvili.

The 43rd World Chess Olympiad started with a spectacular opening ceremony at the Black Sea Arena. The anthems of Georgia and FIDE were followed by traditional dances, a DJ performance, the State Symphony Orchestra and Georgian National Ballet, all coupled with impressive choreography and visual effects.

On the evening of the final round, the closing ceremony was held in the Batumi State Musical Center. For the city, this Olympiad seems to be only the beginning. The local authorities want to turn the city into a magnet for foreign visitors.

"Our ambition is to create and transform Batumi and Adjara into an all-year-round tourist destination. For that, we have invested a lot. We have put a lot of effort into creating infrastructure and we steadily improve tourism products and services," says the Chairman of the Adjara government, Tornike Rijvadze.

For FIDE, the World Chess Federation, the aim is not only to have successful international tournaments and events. As the President of the European Chess Union told euronews, the goal is to have a new generation of chess lovers around the globe.

"Chess should become a part of the educational system, all over the world. We want to build a new generation of players who will play chess, and who will use chess skills in their private lives," says Zurab Azmaiparashvili.

One thing is certain. The people of Batumi love chess. Even little children, just after school, run to the city center to play chess, without necessarily following the rules of the game.