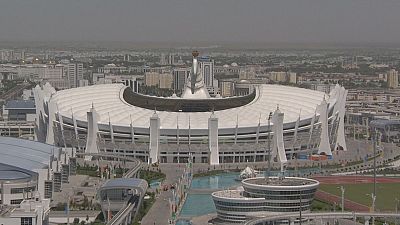 Ashgabat, the Turkmenistan capital, awaits the guests of the Fifth Asian Indoor and Martial Arts Games, also known as AIMAG.

This pan-continental sport event starts on the 17th of September. The brand new five billion dollar Olympic complex is ready for new records.

The best athletes from Asia and Oceania will compete in its beautiful white-stoned venues in 21 different sports for 12 days.

“At this moment all the Venues of the Olympic village are completely ready to host the fifth Asian Indoor and Martial Arts Games, says Dovlet Annayev, AIMAG Venue Management deputy head.

Sixty-five delegations will take part in these games. Around 6,000 athletes, coaches and technical delegates are expected to attend the event.”

The logo of the fifth AIMAG sports one of the symbols of Turkmenistan, the Akhal Teke horse. The 40-metre horse statue, the jewel in the crown of the Olympic stadium, is registered in the Guinness Book of Records as the largest horse head sculpture on our planet.

The stadium, with more than 45 000 seats, will host the opening and closing ceremonies. The content of the ceremonies is being kept secret, but from what we could see it is clear that the show will be breathtaking.

“A big surprise has been prepared for our guests for the 17th of September. I can assure you that the performance will outshine the ones which we saw during the last Olympics and Asian games, says Maksat Nazarov, a specialists for AIMAG Ceremony Management.”

Check out the #Ashgabat2017 Aquatics Centre, where 30 medal events will take place from September 22-25! #AIMAG#AIMAG2017pic.twitter.com/NjuOyPGVgY

The accreditation and uniform centre

The accreditation and uniform centre is working at high speed. Ten-thousand uniforms are being prepared for the participants, including volunteers and technical stuff. Fitting rooms serve help with sizing. There are six types of uniforms, the design is inspired by Turkmenistan traditional motifs.

Hojoguly Allov, AIMAG Executive Committee uniform specialist, says: “Every colour has its own meaning: for example yellow represents the sands of the Kara Kum desert, purple stands for the mellow fig, red represents our national silk fabric and blue, as you can see on me, is the for the Kaspian Sea.”

The equestrian jumper Fagilya Zaripova is preparing for the competitions. Her horse is the pride and symbol of Turkmenistan. The Akhal-Teke is the oldest equine breed in the world, one which appeared here several thousand years ago. Akhal-Teke horses are famous for their speed, endurance and intelligence.

“The hardest thing is to overcome the stress, says Zaripova. “The horse immediately feels any single doubt. That is why I need to be one hundred percent sure that we will get to the end perfectly and win. That’s what I need to think about before the start.”

#AIMAG2017 will be held in #Ashgabat, #Turkmenistan from September 17-27. #OlympicComplex#Ashgabat2017#CaspianNewshttps://t.co/zuCpfi7WPI

Several days ahead of the Games, athletes get ready to win and to inspire. One of the big goals of the AIMAG organisers is to promote sport and health as the main values of life.

And the story of 20 year old kickboxer Hadjimurat Geldimammedov could be a perfect example. His elder brothers introduced him to kick-boxing and he became the pride of his family.

“My whole family and friends will be at the Olympic Complex to support me, and it is very important for me, says Geldimammedov.’‘

Uliana Nazarova, a Ju-jitsu athlete from the Turkmen national team, says: “We can hardly wait for these Games, and want to achieve good results during the competitions.”

Ashgabat is the first city in Central Asia to have the honour of hosting these Games and the city is ready to inspire.