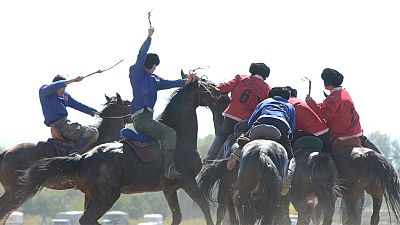 The Kyrgyz Republic is home to the pearl of Central Asia – Lake Issyk-Kul, a government protected biosphere reserve and recognised by UNESCO as the second-largest high mountain lake in the world.

Near the lake, in this untouched landscape, different ethnic groups and nomadic people live in harmony with nature.

Cholpon-Ata, a city in the heart of this region, is host to the Second
World Nomad Games.

Around 10,000 people were present at its spectacular opening ceremony, which featured more than a thousand artists and performers, plus delegations from forty countries.

This is double the number of delegations that participated in the first Games in 2014.

The Games are being held to recognise and revive nomadic sports, and take them to the international level.

Hollywood action star Steven Seagal participated in the ceremony, starting the parade of delegations dressed as a Kyrgyz hero. He talked exclusively to euronews about his passion for nomadic life.

Steven Seagal, actor: “I believe in the nomad life, I believe that all this culture should be preserved, you know, I’m very proud of this president and this country, Kyrgyzstan, for really propagating and trying to protect the tradition of the nomad games.”

Competitions were in twenty-three different types of games, such as Russian mas-wrestling, archery, and Ordo, a game that involves bones.

However the horse games are the most famous, and Kok-boru – Kyrgyz for grey wolf – is at the top of the list. It’s almost like a Central Asian version of polo, but with quite a difference.

The aim is to get a headless goat into the other team’s goal. In the past it was considered training for fighting and was played with a wolf. Even a team from the US took part.

Brock Harris, US Team Kok-boru: “Well, Kok-boru is a very interesting game, to say the least, and I don’t know if there’s an American equivalent. We’re very excited to come and compete with the Kyrgyzstan people and enjoy their national sport. We couldn’t be more excited to get on the filed with them and see what we are made of.”

Daleen Hassan, euronews: “The World Nomad Games is not only about sport, but also for celebrating heritage and traditions.
Since the time of the Silk Road, nomads have been hosting other cultures, while also sharing their own unique spirit.”

The Nomad’s Universe folklore festival in Kyrchyn Gorge features performances of traditional music and impressive horseback shows that create a true sense of the nomadic lifestyle for the audience.

Best cuisine and even yurt decoration contests are held amongst the regions, allowing local and foreign delegations to take part in a cultural exchange.

Aigul, participant: “Everything is happening at a very high standard. All of the audience was delighted, and I think that the Nomad Games ensure friendly relations between Kyrgyzstan and other countries at the international level.”

Young generations also participate in the festivities, to learn about their culture, and how to treasure and share it.

Adina, Kyrgyz performer: “I’m very proud that this type of event is happening here, and I’m proud of this on behalf of all youth. It’s important not to forget your traditions, and that they are remembered and preserved by our generation.”