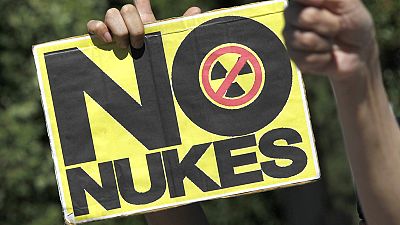 Seeking peace and security through a nuclear-weapon-free world is a commonly held aspiration in the international community. Kazakhstan is a key actor in these efforts, taking courageous initiatives against nuclear tests.

To mark the 25th anniversary of the closure of the Semipalatinsk Nuclear Test Site and the UN International Day Against Nuclear Tests , Astana hosted Building a Nuclear-Weapon-Free World.

Parliamentarians, disarmament experts and international organizations all came together with one goal… building the political momentum to eliminate nuclear weapons.

Despite the challenges, Kazakhstan’s president Nursultan Nazarbayev is optimistic that meaningful progress will be made. He told Euronews:

“The challenge is that if a nuclear war started and everything was destroyed – it would be the apocalypse. I do not think anyone on earth would disagree with this, so we are optimistic. Optimistic because people want to live, raise their children and grandchildren and do not want a nuclear war.Therefore, such conferences and our initiatives are aimed at conveying the danger to every person on the planet.”

The danger started with the first nuclear-test in Kazakhstan in 1949. Over the next 40 years, 455 more nuclear explosions took place there. Residents spoke of how they were even encouraged to leave their homes to observe the mushroom clouds.

The world should never forget what happened on this date on the morning of 1945 … #NagasakiBulletinAtomic</a> <a href="https://twitter.com/napf">napfpic.twitter.com/lS5fw490RK

In 1991 President Nazarbayev and the people of Kazakhstan made the wise decision to close the Semipalatinsk site.

Years have passed, but the impacts remain. 1.5 million people in Kazakhsan are still suffering the consequences. Now the UN’s challenge is to “moblise” nuclear dependent countries to take concrete steps towards stopping nuclear testing altogether.

Getting countries on board

Michael Moller, Director-General of the United Nations in Geneva laid out the challenge:

“It is a challenge in today’s fragmented world, where many nuclear holding states consider it a very important part of their defense posture, and defense plans. They do not want to talk about nuclear disarmament at this stage in history and we all have the responsibility to push and we do.”

Those present raised concerns about the threat of possible nuclear incidents after the recent wave of terrorist attacks in Europe and across the world.

Experts say it is time to put more protective mechanisms in place for existing nuclear systems.

“There is, undoubtedly a risk but it will not lead to a veritable nuclear explosion. Rather it could lead to nuclear incidents, to accidents and therefore there is a great danger”, said former French Air Force Commander,Bernard Norlain.

“That is why this conference was held in Astana, which has the specific aim not only of promoting global nuclear disarmament, but also as a first step, of taking measures that would help eradicate accidental risks and the risks associated with terrorism.”

One highly significant element of the Astana Vision , adopted at the end of the conference, calls on governments to establish nuclear weapon-free zones in the Middle East, North East Asia, and Europe.

In addition, achieving the 2012 ATOM project goals to educate the world about the dangerous long -term consequences of nuclear tests is crucial.

Thousands in Kazakhstan remain scarred from decades of nuclear tests. There are countless stories behind the deformed bodies and faces. One of those stories became the inspiration behind proving that a world free from nuclear weapons is possible.

48 year-old Karipbek Kuyukov is an artist and Honorary Ambassador for the ATOM Project . He was born in a village near Semipalatinsk. His parents were exposed to nuclear radiation and as a result, he was born without arms.

Kuyukov has devoted his life and his art to the fight against nuclear weapons, and he believes that a nuclear-weapon-free world could soon be a reality, he told Euronews:

“In my life I always believe. I believe in what I am doing. Believing is half the battle. I would like to shout out to the whole world, with my voice busting out of my chest – come to your senses, stop!Terrorists should not be able to get their hands on nuclear weapons. Together let’s keep reaching towards our goal. We are standing up for full disarmament of nuclear weapons!”

Kazakhstan’s 2030 strategy builds upon past efforts with a future vision to support international initiatives which strive to create a world free of nuclear-centred politics.