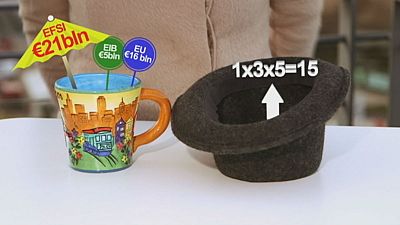 ‘Tis the season for reflection, so Real Economy host Maithreyi Seetharaman has returned to Brussels to sit down with European Commission Vice President Jyrki Katainen for a status check on the EU Investment Plan to bring back jobs and growth to Europe. This episode explores how the plan has done during its first year and what can we expect in 2016.

What is the EU Investment Plan?

Say, you want to build a tram line in your city and its too risky for commercial financing. You now know you can go to Europe hat in hand. The EU will put 1 euro into your project, which will attract other investors to grow that investment to 15.

That one euro came from a pot of 21 billion (the 16 billion euro EU guarantee and the 5 billion in EIB capital) – which all sits under the umbrella of the European Fund for Strategic Investments (EFSI).

EFSI is not a new fund. Putting it under the EIB mandate allows the bank to carry out its normal due diligence on project proposals, but lets it also take on riskier projects than it usually would.

Since April, the EIB has approved 34 projects with EFSI – with financing of around 5 billion euros, which is expected to raise around 23 billion euros.

The projects are in 13 different countries – with nine projects already signed.

The pace of investments is expected to pick up in 2015, so Euronews’ Monica Pinna decided to follow the money.

When you are cruising along in life, taking a tumble comes as a bit of a shock. But how quickly you manage to dust yourself down, get up, and get moving again can determine how smooth the ride will be going forward.

That’s the conundrum facing Europe, which has suffered a sharp fall in investment levels since the crisis.

Monica Pinna reports: “EFSI will guarantee financing of around 49 billion euros through the EIB and 12 through the EIF. The goal is to mobilise, in particular, private sectors investment”.

Half the 34 approved strategic projects are in the area of green energy. Other investment destinations include healthcare research and development, as well as biotechnology, digital and social infrastructure, and transport. Of course, providing support for SMEs is also a major goal.

But critics, such as Guntram Wolff of European think tank Bruegel, warn that the Investment Plan lacks the firepower to unlock its 315 billion euro goal.

“The real thing that matters for private investors is the return. The truth is that there is not much reduction in risk through the public sector and the returns are also highly uncertain. There is too little public money on the table and there is not enough structural reforms, and single market initiatives that would make investment really attractive again,” Wolff says.

That’s got Europe looking for other EU funds that can compliment the EFSI project goals, such as the European Structural and Investment Funds (ESIF), which have a recently-announced new budget of 450 billion euros that could be complimentary to EFSI development projects and support investor confidence.

The EIF has in 2015 pumped in 1.5 billion euros into 62 operations aimed at growth projects for Europe’s struggling SMEs. That is expected to trigger another 19 billion in private investments.

“Many private investors are interested and have studied these projects, but not many have jet been convinced that the package on the table really is attractive for them,” says Wolff. “So what they need is on the one hand insurance on the bigger risks and on the other hand better frame book conditions, better planning horizons.”

That reassurance is now the 2016 goal to revitalise investment in Europe.

Maithreyi Seetharaman: A favourite project of yours that you mentioned to me on Twitter was Green Energy Homes in France. If we use that as an example, can you explain in very simple terms how the investment structure of a project like that works?

European Commission Vice President Jyrki Katainen: In France, there are three regions who will pool together 40,000 buildings and arrange financing for renovating those 40,000 buildings. EFSI the new risk fund, EFSI will cover part of the private investors risk.

MS: Who is the strategic investor in a project like this?

JK: “They can be pension funds, insurance companies, investment banks – partially also national promotional banks. The private house owner also pays at the end of the day in the bill.”

We will raise awareness of the EU Investment Plan #investEU for all citizens. Aim is to create #jobs and #growth. pic.twitter.com/Tg8eU5VNRJ

MS: “How do you scale up a project like this? Do you think there is enough clarity in the methodology of picking these projects?”

JK: “We still have a challenge that some people tend to think that the Commission selects the projects and that the resources are like grants. All the projects that can get financing from EFSI are selected according to merits by an independent investment committee. And, EFSI doesn’t provide any grants but it provides loans, guarantees, equity, quasi-equity and things like that. It must be high risk projects, higher (risk) than what the European Investment Bank (EIB) usually finances.”

MS: “Do you think the structure seems to reflect more of the venture capitalist culture?”

MS: “Is there any particular reason we have not seen more core infrastructure investments?”

JK: “Usually core infrastructure investments are very massive ones and it always takes some time to construct the whole project up and this is probably one of the reasons.”

MS: “China showed interest in what is going to be different with what the Chinese do..where are the other global investors because you need big projects now to reach that 315 billion euro goal in two years.”

JK: “I am confident that we will manage to finance projects in worth 315 billion in two and a half years or so. We have a joint working group. Joint means European Union, European Investment Bank and Chinese authorities, which try to find the best possible vehicle for Chinese investors to invest in Europe. We want to give them more opportunities to invest through special vehicles, through investment platforms etcetera.

“And those same platforms are open for any other countries. There are many countries from the Gulf region – also some American companies have been interested. I also visited Singapore where some fund managers said they are planning to invest more in Europe. Today or this year’s result is that there will be more or less 50 billion additional investment in the real economy. Next year, it should be at least double – we are lacking 300 billion per year and EFSI is supposed to finance 315 billion in 3 years time.”

MS: “What is going to bring the investors back to the table?”

JK: “The first concrete result which should happen next Spring is the opening of a project portal. It basically means a European-wide website which both private and public project promoters can bring their projects and they can get better visibility. The second, we will bring concrete proposals on harmonising on internal market side – for instance, the digital single market. In (the European Commission’s) Capital Markets Union, from the beginning of next year, we will flexibilise the capital requirements of insurance companies which will help insurance companies to invest in the real economy. Also in the energy market sector and in the circular economy we will harmonise regulation. Basically, Europe has chosen the way forward – and it is to create a new market instead of securing the existing one.”

Europe: which projects and why?