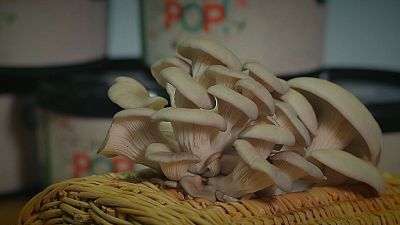 Loïc Van Cutsem is the General Manager of Oksigen, a company that believes society’s most pressing issues need to be tackled using an entrepreneurial approach that simultaneously creates social and economic value.

“Social entrepreneurship is a movement that is growing around the world,” says Loïc. “In Europe, it represents roughly five percent of the working population. But beyond that, and what is more interesting, is that the phenomenon is causing traditional enterprises to rethink the way they do business.”

PermaFungi based in Brussels, is a good example of what we are talking about.

They grow mushrooms using using coffee grounds as a fertilizer. A cyclists collects around one-and-a-half tons of used coffee from restaurants every month.

The company produces around three to four hundred kilos of fresh organic mushrooms, which are then sold in markets. They also make kits for growing mushrooms at home.

Once production is complete, the coffee grounds are again re-used as a fertilizer, this time by farmers.

Another interesting aspect of the project is that it creates local jobs for the low-skilled staff, who might otherwise have difficulty finding a job.

“The project has given me a sense of responsibility, a lot of confidence in myself,” says PermaFungi worker William Berger. “Now I am able to approach people with confidence.”

Martin Germueau is a co-founder of the company:

“From the mycelium, which is the basis of the fungus, we can produce insulation panels for example. And with the coffee grounds, there are also different possibilities such as making soap.”

So there are many opportunities, but the main idea is to come up with a dynamic new entrepreneurial model.

“Our goal is not to become a huge mushroom producer,” says Martin. “But rather to help other social entrepreneurs to start their own mushroom production in different locations.
In Brussels, around 5,000 tons of used coffee grounds are produced every year, giving us the potential to grow a thousand tons of local mushrooms.”

Social enterprise has particular potential in terms of the circular economy, or recycling. Collective financing is also a good way to raise funds for such projects.

PermaFungi raised over 10,000 by way of crowdfunding. So does that mean that the crowdfunding system is particularly suitable for social enterprise?

“Yes I think it does,” Loïc Van Cutsem. “There’s an underlying trend. More and more people want to give meaning to their money and their work, and crowdfunding is an adequate response since it allows them to directly support these social enterprises.”

Loïc Van Cutsem says that social enterprise is not only possible but that there are an increasing resources available throughout Europe to help and support projects.

You can see the full programme by clicking on the video above.