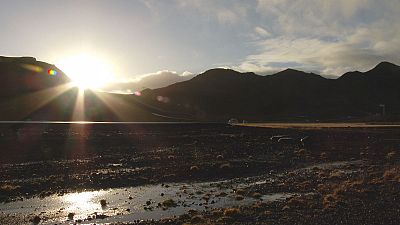 How can we recycle CO2, harness wind in urban areas and fly with the help of helium? Discover three European projects who are tackling climate change head-on.

euronews: Global climate change is one of humanity’s biggest problems, but what can we do with the CO2 that is emitted into the atmosphere? In Iceland, scientists are working on a solution.

Iceland largely relies on geothermal power, one of the greenest energy sources available. But the underground geothermal fluids contain CO2 of volcanic origin which also ends up in the atmosphere.

Edda Sif Aradóttir, Reservoir Engineer, Reykjavik Energy, CARBFIX project coordinator: “Geothermal power plants do not emit a lot of CO2. For example, the Hellisheiði [pronounced Khedlis-kheidi] power plant which generates 300 megawatts of electricity emits about 40,000 tonnes per year, which is around 3% of what a fossil fuel-powered power plant of the same size would emit. So we do not emit a lot, but we’re still trying to reduce our emissions.”

Instead of emitting the carbon dioxide and other gases into the atmosphere, here it is captured, mixed with water that comes from the same steam, and then pumped deep into the ground. The technology involving the recycling of the CO2 tested at the plant can also be used by other industry.

Magnus Arnarson, Chemical Engineer, Mannvit: “When the steam goes through the turbine it goes to a condenser where the steam is condensed, and goes from steam to water. We simply use that water to dissolve the CO2 and H2S and pump it down again, because everything that comes up we have to pump it down again.”

Powerful pumps inject the carbonated water at a minimum of 500 metres depth. This ensures that the CO2 won’t leak into the atmosphere.

Edda Sif Aradóttir: “So here we are at the injection site, where we inject the CO2 dissolved in water back into the ground. Basically we have to make sure that it stays at a large enough depth that the pressure of the water column above the injected gas is high enough to keep it dissolved.”

Iceland, and island, is composed primarily of basalt. This porous rock of volcanic origin plays an important role in capturing the carbon dioxide: it chemically reacts with carbonated water, turning the CO2 into solid minerals.

Ingvi Gunnarsson, Geochemist, Reykjavik Energy: “Basaltic formations are good for injecting CO2 because of the chemical composition of the basaltic rock; it contains a lot of calcium, iron and magnesium, and these ions are necessary to mineralise the CO2 in the ground.”

Experiments at the University of Iceland have demonstrated the viability of this conversion method. Using basaltic powder to simulate the underground processes, scientists initially predicted that it would take around five years for CO2 to mineralise.

Iwona Galeczka, Geochemist, University of Iceland: “People were doing some modelling, so they were modelling big scale injection, and then they were saying it would take at least few years to change the CO2 into carbonate minerals. But actually the field work now … showed that we got it much faster – and this exceeded our expectations, so we are very happy about this, that we could store it, and this is actually wonderful news for us, for scientists, and for the people, because you know, we can fix the CO2 – and do something with our climate.”

Core samples have shown that the CO2 converted into solid calcite in just one year, significantly faster than scientists forecasted.

Edda Sif Aradóttir: “Here in the core we can see the white spots – these are calcium carbonate precipitates showing us that the injected CO2 has mineralised, turned into stone, and thereby we have immobilised it permanently.”

But what about by-products of this method? Is it safe for the ground water? So far scientists working on this European research project haven’t found any reason for concern.

Sandra Snæbjörnsdóttir, PhD student in Geochemistry, University of Iceland: “We take samples and analyse them for trace metals to make sure that we’re not contaminating the water, and in this experiment all the samples have been within the drinking water limits.”

euronews: Tomorrow’s cities will increasingly rely on alternative energy options. Today’s windmills produce a lot of noise, aren’t very bird friendly and are often located far from end-users of their energy. But there is an urban solution…

Pedro Ruão, Material Engineer and CEO, Omniflow: “It works like a wing that turns the wind flow from horizontal to vertical to rotate the central turbine and generate energy.”

Highly efficient solar panels at the top of the structure generate energy whenever there’s sunlight, and the horizontal rotor blade works independently of wind direction.

Pedro Ruão: “With this device, you can power your house with your own local energy, without using the electricity from the grid that might come from coal or nuclear power plants, so you contribute to sustainability.”

Supported by a European research project, the technology is marketed for various applications. In the city, it can power electronic equipment independently from the urban electrical grid, which can be complicated to plug into.

João Pina, Telecom Engineer, Drivetel: “Nowadays, you need to dig cable trenches in the ground to connect your equipment to the grid. You need authorisations which you sometimes don’t get in time. So it’s much easier and faster to use this solution to provide electricity on the spot.”

The batteries, hidden under the shell of the device, store the generated energy. Various components can be added depending on the specific need.

Jorge Amaral, Electrical Engineer, Officelan: “The empty space inside allows us to install all kinds of electronic devices which can, for instance, provide wireless connectivity in rural areas. We can install antennas to provide mobile internet in remote places.”

As the sun sets in Porto, one of the brightest applications of this technology becomes evident: the intelligent LED lighting automatically turns on, using accumulated energy to illuminate the marina.

Pedro Ruão: “What we have here is the prototype system – a single unit isn’t enough to make much difference, but you can imagine a hundred of such devices that will generate 15 megawatts/hour of power per year, contributing to the city.”

Return of the airship

euronews: In Bedford, England, a cleaner and quieter alternative to modern airplanes is taking shape. The creators of an immense airship soon expect it to take to the skies, defying the means of aerial transportation.

Called “Airlander”, the hybrid airship combines several aeronautical technologies, including some used by planes and helicopters, to maximise its efficiency.

Chris Daniels, Head of Partnerships and Communications, Hybrid Air Vehicles: “The hull has got 38,000 cubic meters of space inside it, which is mainly filled with helium, lighter than air. That gives it lift, about 60% of its lift comes from that. Up to 40% comes from having a wing shape, having an aerodynamic shape, and that gives it extra efficiency and means it’s very controllable.”

A test flight, made by a prototype version of Airlander, demonstrated good flight capability. At 150km per hour it doesn’t move very fast, but it can remain safely buoyant for weeks, and doesn’t need airports to take off and land.

Tom Grundy, Operations Director & Aerospace Engineer, Hybrid Air Vehicles: “We can do deliveries into places that perhaps got no runways, or perhaps have been damaged in natural disaster or something like that. So a bit like a helicopter, but much much bigger and more efficient.

We use helium, not hydrogen. Helium is an inert gas – it doesn’t explode, it doesn’t set on fire, it won’t support a flame. We’ve also got lots of different ways of lifting this aircraft, so some of our lift comes from buoyancy, some of it comes from aerodynamics, some of it comes from the vector thrust of the engines. So we’ve got a lots of redundancy, and lots of safety in the way that we operate the vehicle.”

The Airlander will be capable of transporting up to 10 tonnes of load. Its next version will have a capacity five times bigger – on par with cargo planes, but with much better fuel efficiency.

Rowan Geddes, Propulsion Lead Engineer, Hybrid Air Vehicles: “If we’re using a 21-day mission, which is what the old vehicle could do, we would use as much fuel as a fighter jet would use in 1 hour. And we would stay up for 21 days, non-stop. So a significant difference in the amount of fuel used, for sure.”

Engineers expect hybrid airships to become a popular way of transporting cargo when high speeds aren’t required. They can be the best choice for long-term observation missions, or can even serve as hotels in the sky – with minimal atmospheric pollution.

Chris Daniels: “We’re already a quarter to a third of the emissions of other aircrafts. But in the future, we should be going all-electric and having solar panels on the surface of the aircraft, which will make us a zero carbon aircraft, and that will truly revolutionise the emissions problems that aviation are causing at the moment.”

Climate change is a tough challenge, but new engineering alternatives and scientific solutions can lead the way to a brighter – and greener – future.