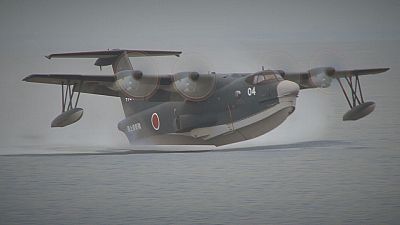 In this episode of Target Special Japan we discover a unique amphibious search and rescue plane.

The ShinMaywa, used by the Japanese Navy, is the world’s only aircraft able to take off and set down on extremely short distances of between 280 and 330 metres at sea, and tackle three metre swells.

It can go an incredible 4,700 km without refueling and remains stable at low speeds of 100km/h. The secret is a fifth engine on the upper part of the wing.

Michel Théoval is ShinMaywa’s European spokesman: “It has a turbine that generates hot air, which is injected over the wings and tail. It creates a vacuum called a ‘control limit layer’. It literally glues the plane to the sky.”

Tests are under way on a fire-fighting version. It would carry up to 15 tons of water – three times more than most. There is interest in Europe and the plane could be produced under license in France and Germany in the coming years.

Our correspondent Serge Rombi said: “This astonishing aircraft is proof that Japanese high-tech is about much more than entertainment and games. The technology’s been around for 40 years and, according to official figures, it has saved more than 1,000 lives around Japan’s territorial waters.”

Another cutting-edge innovation in Japanese high-tech is HAL, said to be world’s first cyber robot. It is an exoskeleton which gives mobility to patients who have lost autonomy through a stroke or other conditions.

“When the brain gives the order to make a move, this order goes to the extremities. We install sensors on the skin that process the signals. In fact, this robot works with human will power,” explained Professor Yoshiyuki Sankai, chief executive officer at Cyberdyne Inc.

The effects of HAL are astonishing according to Sato Ikuma, a therapist at Robo Care Center: “A patient with polio came here. Other hospitals could do nothing for him. They tried the robot and he managed to get up and walk. I was very touched. I strongly believe in the potential of this robot.”

Today, the robot is used in 170 hospitals in Japan and 60 institutions in Germany and Sweden. Its creator also hopes to enter the US market soon.
In the future, the aim is to widen the scope, to moving heavier loads in industry, and to find new medical applications.

“If we can use human will with this technology, and connect this to a computer, we could treat patients suffering from serious diseases such as Lou Gehrig’s disease. So completely paralyzed patients could type on a computer with just their will power, and so be able to communicate again. This technology could help such patients,” insists Sankai.

Japanese high-tech continues to develop, bringing new practical and useful solutions for Japan and the rest of the world.