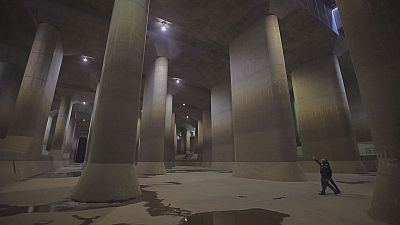 Japan is a world-leader in thwarting the risk of natural disasters.

In the first episode of this special edition of Target Japan, we head to Sendai, the capital of the Miyagi Prefecture. The town is situated in a region struck by the 2011 earthquake and tsunami. It was also the location of the United Nations’ third World Conference for Disaster Risk Reduction.

At the conference, Japan’s Prime Minister, Shinzo Abe, announced a new plan for thwarting the risk of natural disasters. Across a period of four years, 3.8 billion euros will be used to train 40,000 people and develop Japan’s international cooperation in this sector.

Several targets were set in Sendai: for example to reduce deaths resulting from natural disasters by 100,000 over ten years; but also a reduction in the economic loss linked to natural catastrophes.

Neil McFarlane was a coordinator at the conference: “We have calculated that that’s around 300 billion US dollars a year. “Particularly over the last ten years, it has increased. Dramatically,” he emphasised.

Japan has always been susceptible to typhoons. It is home to more than a hundred active volcanoes and almost 20 percent of all the planet’s earthquakes rated magnitude six or more are concentrated there.

Yet, the number of victims is much lower than elsewhere. This is thanks to a real ‘culture’ of risk prevention, according to Yoshiyasu Hyoutani, the Japanese government’s Deputy Director General for Disaster Management.

“We have over 4,000 checkpoints scattered across the archipelago. We are able to measure the magnitude of an earthquake in an instant and immediately send information across the country,” he explained. “For example, at the time of the 2011 earthquake, there were a hundred Shinkansen high-speed trains in operation. We stopped them immediately and there were no accidents, no deaths.”

Japan also has the world’s biggest infrastructure for flood prevention: a gigantic main reserve tank, five containment silos and a network of more than six kilometres of underground pipes of a diameter of 10.6 metres.

The system collects water, drains flooding from four rivers and spurts out up to 200 cubic metres of water per second into the region’s main river, near Tokyo.

Its impact, in an area where urbanisation stands at 50 percent, is considerable, as the Chief of the Metropolitan Area’s Outer Underground Discharge Channel, outlined.

“The result is that we have four-times fewer flooded zones,” said Chief Oosu Eiichi. “And we have cut the number of houses affected by floods by two thirds.”

Standing at 634 metres high, Tokyo Sky Tree has become the symbol of the Japanese capital. But it is also an outstanding feat, which – thanks to its structure – is earthquake-resistant. It comprises a central concrete pillar, connected to external steel elements through a system of shock dampers.

“The central pillar and steel structure sway in opposite directions. They can offset up to 50 percent of the energy affecting the tower and the tower is earthquake-resistant,” explained Tokyo Sky Tree’s Haruki Nagatsuma.

This was an enormous feat, since the tower also serves as a telecommunications system when a natural disaster strikes. Yet another key element of Japan’s ingenious system for disaster risk reduction.