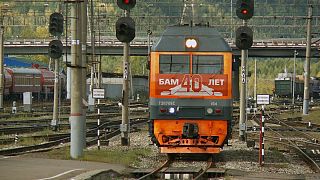 It was billed as ‘the project of the century’ in Soviet Russia. The Baikal-Amur mainline made history 40 years ago when an army of young communists built this railroad through the east Siberian permafrost. It was meant to be paid for by the region’s vast mineral riches, but those never materialised and the dream gradually died.

But times have changed and the project has been rekindled.

Day and night, work never stops in the Neryungri open-pit coal mine. Begun in the 1970s, the immense mining and processing complex was to become a model for Siberia’s industrial future.

That’s not how things turned out but there is still plenty of interest in the region, as Igor Piskun, head of the regional rail operator explains: “We’ve got the whole periodic table of elements, all possible mineral resources, ranging from coal to iron ore, non-ferrous ore, magnetite ore and so on.”

The key to this treasure trove is the railroad. This remote far eastern land was barely inhabited when the construction of BAM, the Baikal-Amur Mainline, began. Some forty years later, the railroad remains an isolated backbone.

“Coal and ore are the main cargo. They’re generally transported to the Pacific seaports and Chinese border crossings,” says Piskun.

In this region, less than a thousand kilometres from the Arctic circle, the climate is unforgiving. Hot summers followed by winter temperatures that can plummet to minus 60 Celsius. Only very limited agriculture is possible. In the permanently frozen subsoil even the trees don’t grow tall.

“Look, it was -5 this morning, and now by midday it’s around +20. That’s quite a span. There’s a risk of rail deformation. So we need to remain watchful,”
says train driver Vitaliy Kapenkin as we trundle along the historic track.

Branching off the old Trans-Siberian railroad, the Baikal-Amur Mainline detoured away from the troubled border with China, through the rich untapped deposits of coal, iron, copper, gold and diamonds.

It was built by tens of thousands of young activists, attracted from across the Soviet Union by the call of this romantic, epic undertaking. Though the promise of high wages and plentiful consumer goods were also incentives. Building a railroad in such terrain was an unprecedented engineering challenge, as Ivan Varshavskiy an ex-worker on the project explains: “Lots of tunnels, many rivers, thousands of bridges and other artificial structures. And the railway path itself was very difficult, twisting and turning. And, of course, the climatic conditions!”

It took ten years to complete the track that was meant to link a dozen so-called territorial-industrial complexes, like Neryungri.

“We felt sure the day would come and BAM would make this land a true goldmine for the country, a bonanza! And not just for Russia, but for the whole world. Any resources that were needed – we could ship them to anyone,” says Varshavskiy.

But very soon inefficiency began to take a heavy toll. The workers’ towns fell into decay, losing half their populations as mining and other projects were cancelled. None of the planned industrial complexes were built after Neryungri. Finally, in the 1990s, the railroad was pronounced non-viable.

“It was a time when we were suddenly accused of having done something wrong – we were told that we have built a road to nowhere, that BAM is completely useless!.. And that was so cruel and offensive to the builders, who worked not for their own sake, but to help the development of the country,” says Ivan Shestak, a journalist who once worked on the BAM.

All hope seemed lost when BAM’s fortune took an unexpected turn. With the resources boom of recent years private companies began developing mining areas in the region, leading to congestion on the single-track mainline. That sparked a plan to modernise BAM and Trans-Siberian railroads. Business has never been brisker, according to Elena Kovalyova a train dispatcher:

“Every year, the freight volumes are growing due to the opening of new mining fields in South Yakutia.”

Igor Piskun believes that trend will continue: “After modernisation, the number of freight trains will increase by several times, and that will allow us to transport more cargo. The ports are also being upgraded to take heavier loads – now it’s up to us to improve the capacity of the railway.”

The cost of the large-scale upgrade is estimated to exceed 10 billion euros in the coming years. Whether this time it will pay dividends remains to be seen, but the construction work has already began and Yuri Polyakov, deputy director general of the new BAM project is optimistic: “Since the BAM was first built 40 years ago, we’ve got new tools, new machines, new building technologies and synthetic materials, so now we can build the new railroad faster and better. We’re not afraid of the winter, we’re not scared by the permafrost and frozen forest that surrounds us – all this is our land.”