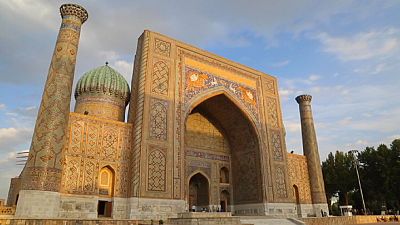 The ancient and spectacular Uzbek city of Samarkand provided a fitting venue for the 99th Executive Council session of the UN World Tourism Organization.

Steeped in more than 25 centuries of history Samarkand has been a UNESCO World Heritage site since 2001 and is where “The Declaration of Silk Road Tourism’ was was adopted 20 years ago.

In his opening speech Uzbek President Islam Karimov said the development of tourism would be impossible without ‘ensuring peace, security and political and economic stability in the world’.

In spite of ongoing global problems worldwide tourism did, in fact, increase by more than expected in the first half of 2014, up by more than 5%.

The Secretary-General of the UN’s World Tourism Organization, Taleb Rifai said:
“Tourism is a very important sector, very important human activity in the life of people today, we are underestimating what it is doing to the lives of people, how much it benefits, how much income, how many jobs it is creating. So it was an eye opener to all decision-makers to take tourism seriously.”

For Uzbekistan this world forum opened additional opportunities, attracting investment and showcasing its stunning, historic sights. It was also an occasion to charm visitors with the famous Uzbek hospitality.

“The organization of this conference in Samarkand will chart the way to attract more tourists to Uzbekistan and particularly to Samarkand,” said Farrukh Rizaev, Chairman of ‘Uzbektourism’.

“And, what’s more, to make the wider public aware of the city’s role in the field of tourism and its significance in the Great Silk road project.”

The open-air market has a special place in Central Asian culture. The traders in Samarkand’s bazaar say there you will taste the juiciest melons, the sweetest grape, the best nuts in the world. And, of course only there will you find the beautiful, handcrafted traditional Uzbek hat, the tyubeteika.

In the bazaar we met one young couple from Mexico, taking in the sights, sounds and aromas around them:

“It’s a very mystic place around Samarkand and all cities. There is a lot to see around and hopefully we get all the time and money to come back, sure,” the young man said.