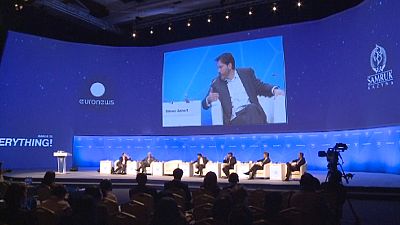 More than 700 delegates from around 70 countries were present at the 12th Eurasian Media Forum in Astana, the capital of Kazakhstan. Famous politicians, journalists and top media executives discussed a wide range of topics – from global crisis to country branding.

“During the year we analyse the events which appear most in the media, and which provoke a lot of emotion. We collect information, analyse it and draw up a programme for the forum,” explained Ruslan Zhemkov, Director General of EMF.

Questions included, “How does globalisation effect reality in the 21st century?” and “is there a new global order?”. From one delegate there was a rather pessimistic point of view.

“I don’t think there is a new global order. I think there is an emerging world technology, and there is an emerging world economy, but I think that politicians and governments are generations behind, and you will see more disorder in the next 50 years, and we need to learn how to manage the disorder so it does not cause major damage,” opined Newt Gingrich, the former Speaker of the US House of Representatives

Everyone in the hall could join the discussions and there were some incisive questions from the audience.

“This forum is an open platform for a battle of opinions. Many speakers are often diametrically opposed in their thinking leading to robust discussions,” said euronews correspondent Galina Polonskaya who was at the forum.

2The Middle East Tinderbox – Who holds the key to resolving the conflict in Syria?”. That was a title of one of the discussions.

Euronews put that question to Alessandro Minuto-Rizzo, former Deputy Secretary of NATO and the author of the book, “A political journey without maps. Diversity and the future in the greater Middle East”.

“The Syrian crisis is almost impossible to solve, because the Syrian state is a fragile reality. You have many ethnic groups, many established traditions that are not really unified. I think that in the end it’s the Syrian people who hold the key to their own future. It is very difficult for anybody else to interfere,” he said.

The role of the global media with its 24-hour rolling news channels focusing on every detail of global conflicts has changed the 21st century. That was the view of one of the delegates.

“People are aware of every disaster on earth; a tsunami in Indonesia comes into every home within hours, but especially wars. From war to war it became clearer that leaders will have to take into account the sensitivity of their own public to the price of war,” stressed Ehud Barak, former Prime Minister of Israel.

The tsunami of social media has hit a new generation many of whom don’t even have a land line at home. Could it really replace newspapers,magazines, radio and TV? Even though some believe it could happen, most analysts doubt it will.

“I don’t think social media is evil, but I do think that you need to be careful in describing tweeting as journalism, because I am not sure it is journalism; old fashion reporting still has its role to play,” said Stephen Dunbar-Johnson, International President for New York Times.

Internet and social media played a crucial role in the election of President Barack Obama. One of the delegates at the Eurasia Forum Roger Fisk, created the strategy that helped the US president win two elections.

“For the first time ever, at least in American political history, we invited people to come into our website and create a profile, import their contacts, and then we allowed them to use our website as a tool to actually not just get the news about our political activity but to create their own political activity. It was called My BarackObama.com,” he explained.

Simon Anholt is an image maker for nations. He invented the term “national branding”. He has advised dozens of heads of states and governments on how to create an image for their own country. He is sure that a good image is the synonym of a good life in that particular country and insists that self-publicity is a waste of money.

“We live in an age of enormous challenges, climate change, nuclear proliferation, terrorism, humans rights, children’s rights, etc.  Any country, if it takes one of those issues and it demonstrates some progress on one of those issues, then it will quickly earn a good reputation,” he said.

This cross fertilisation of opinions aims to look into the future of our world and will take place in a years time again. Preparations for the next Eurasian Media Forum which unites Europe and Asia have already started.