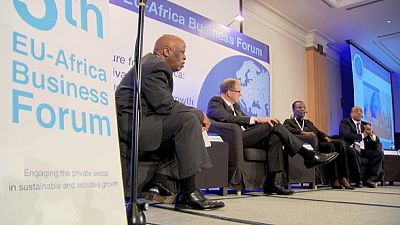 In this edition of Focus, we are at the EU-Africa Business Forum in Brussels where euronews’ Audrey Tilve reports: “It’s been a long time since Europeans were the exclusive trade and investment partners of their former African colonies. Now China, India and Brazil vie with each other for opportunities to invest in a continent where economic growth averages five percent. So what do Europeans have to offer? We asked some of the 1,000 or so decision-makers, investors and entrepreneurs gathered here in Brussels.”

The event brought together participants from Europe and Africa, including entrepreneurs looking for funding.

One such is Francine Munyaneza from Rwanda, who a year ago set up a solar energy company, Munyax Eco. She would like to be able to build locally the kind of solar water heaters she currently imports, but she is having difficulty getting credit.

She told us: “Interest rates are very high in Africa. It’s not just in Rwanda, it’s everywhere in Africa, and I think it’s linked to the risks and problems of inflation, and so we have rates of eighteen to nineteen percent.”

“What we do is bring our experience in providing growth capital from Europe to Africa, but that we leave the assessment of the viability of a company to our local partners in Africa with whom we co-invest and that we support the local entrepreneur in creation those abilities in growing a company,” Van Aalst said.

Over half of Africa’s population is under 20 years old, and eighty percent of the people live in rural areas, where there’s a shortage of teachers. That makes education a huge challenge, though it can be partly addressed by new technology as we heard from Louis Onyango Otieno of Microsoft’s 4Afrika programme.

He said: “In urban areas, it may be every child has one laptop. In the rural areas it may be it’s a lab scenario (where pupils in a classroom share a limited number of computers), but what we need to be aware of and what we need to provide for is the flexibility.”

One of the Millennium Development Goals set by the United Nations was to bring primary school education to all the world’s children. That led to computers being introduced to classrooms in Rwandan schools under the One Laptop per Child programme (OLPC).

Sven Aerts of OLPC explained: “People in the open source computer software community approached [the then UN Secretary General] Kofi Annan and said imagine if you could shrink a school so that it fits into a lunchbox. And there’s a small solar panel that powers it, because these computers are very energy efficient.”

Pharmaceuticals are one strategic areas where Africa wants to reduce its reliance on the developed world. The continent imports 80 percent of its drugs, often at very high prices. In the northern African countries, they are setting up local production. Further south, some drugmakers have already built factories and are beginning to offer partnerships, including training of researchers and joint laboratories.

Andrew Witty, the chief executive of GlaxoSmithKline outlined their strategy: “We’re taking a very long-term view. We think demand is going to grow up significantly, we think that it’s probably not right or efficient for all of that demand to be imported, some of it will always have to be imported just like any other country in the world but there is a requirement for building up domestic capability, and we and they benefit of having that manufacturing capability on shore in the country.”

Africa also wants to become self-sufficient in agriculture, to end the situation where the continent imports nearly half of it’s food needs.

Lucy Muchoki, the head of the Pan African Agribusiness and Agro Industry Consortium, told us how they can do that: “We really need to clearly adopt new technologies and we can only do this through partnerships, partnerships with the Europeans, that’s why we are here. We want to learn from you. And after all, Africa is one continent [where] you can grow everything. “

And to boost its global influence and better defend its interests, Africa also needs to be more united – according to Botswana’s former President Festus Mogae.

“You, Europeans, you are experiencing some difficulties in your collaboration but of course you are advanced. But what are we doing as Africans to answer that, to actually work together? There is a lot to be done and it’s upon us Africans to do it ourselves,” Mogae concluded.