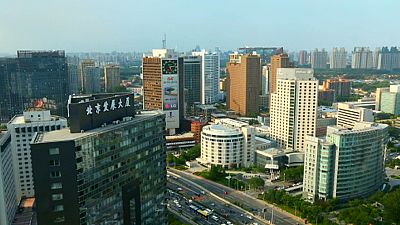 “Obviously for a company like ours it’s a market with considerable potential.”
“There are opportunities we mustn’t miss.”
“Growth and preservation of environment can go hand in hand”
“We are looking at technologies more green, more safe.”
“[You must have] absolute secrecy protection before showing anything. You have to be ready before coming to China.”
“It’s a competition. You mustn’t stay at home. If you do, you’ve lost.”

Serge Rombi, euronews: “The green business opportunities here in China are enormous and expanding. For Green energy alone, there were investments last year of some 50 billion euros.”

Business dating. A few days ago in Beijing five dozen European companies were present to meet Chinese businessmen. The aim was to try to sell European green technology expertise. The delegates were accompanied by two European Commissioners. Several statements of joint intentions were signed, such as with the Chinese minister for industry.

Antonio Tajani, European Commissioner for Industry and Entrepreneurship: “We have fantastic expertise and know-how. Our companies are leading in the fight against climate change and pollution. That’s why we are presenting to the Chinese what we have.”

Janez Potočnik, European Commissioner for Environment: “All those technologies are somehow existing, and we are in many of those areas world leaders. So, we see that here it is clearly a wish for cooperation existing and also need for the solutions.”

Serge Rombi: “Here’s a number to understand why green technologies are so important here: each year in China, pollution is the cause of one million two hundred thousand premature deaths.”

That is the dark underside of China’s extraordinary growth. In Beijing for instance, pollution is 20 times the maximum level recommended by the World Health Organisation. Another big problem is access to water. China has just six percent of the world’s water reserves and 20 percent of its population. This multinational wants to develop gas, which today represents only two percent of the energy mix in China.

Denis Simonneau, European and International Relations, GDFSUEZ: “We have a lot of contact with Chinese decision-makers who are interested in developing this in the beginning by importing liquefied natural gas, and want to study the non-conventional gas potential, and develop gas-powered vehicle fleets, for instance here in Beijing.”

European small and medium sized companies especially interest the Chinese in the area of energy efficiency, waste management and resources, said pharmaceutical entrepreneur Pen Guo, President of AstaTech: “They have developed very good technologies and and managed the system to solve these problems. Currently in China, there is a long way to go, especially for some special technologies.”

Even though the Chinese authorities seem to want to fight the non-respect of intellectual property rights, it remains a real problem. We spoke to a lawyer who advises rights holders to register them in China even if the holder doesn’t intend to be in the Chinese market.

Paul Ranjard, Counsel Lawyer, China IPRSME helpdesk: “One mustn’t be naive. The Chinese travel, they go to trade fairs and see products and brands and see that they sell. They come home, copy that and patent the things themselves. Afterwards, try and fight it. If you haven’t ensured the right conditions, it’s too late.”

In spite of everything, China remains a key market. More than 85 percent of the European companies in the country intend to expand their activity, thanks to partnerships and organisations that foster development.

Chris Cheung, Director, EU SME Centre: “It is absolutely essential that you meet with your Chinese partners and you build a genuine close relationship with them in order to enter the Chinese market. The other thing you have to do is carry out the market research before you get here. Is the Chinese market really ready for your technology? And are they willing to adopt it in the next few years?”

Antonio Tajani, European Commissioner for Industry and Entrepreneurship: “Properly accompanied, with follow-up by European organisations that help and know the situation already, that know Chinese realities – if one works in that way I think one can do well here in China.”