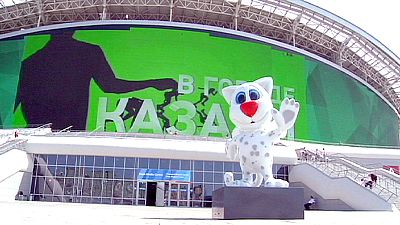 Nearly 10,000 athletes from more than 160 countries take part in the World Student Games. With 27 sports in which you can win 351 sets of medals it is bigger than even the Olympics. London offered 302 sets of medals in 26 sports.

Kazan, the capital of the Republic of Tatarstan, hosts the 27th edition and it is a matter of honour for the entire Russian Federation.
to show the world it can organise a global multisport competition.

No bombast was spared in a lavish opening ceremony, the cost of which is not being revealed.

“The ceremony was a different story for us. We have been working on it for two and a half years. That was an immense effort from an enormous number of people. What you saw on stage was the essence of what we wanted to show: what is Russia, what is Tatarstan, what is Kazan. All the compositions, music and video content were specially prepared for the ceremony. People around the world saw and heard that for the first time ever,” said the General Director of the Kazan 2013 Executive Directorate Vladimir Leonov.

The live broadcast of the ceremony was reportedly watched by more than one billion viewers. It was a cultural shock for the world, claimed Leonov.

Officially, the budget of the Universiade in Kazan is a little more than five billion euros. It is the second-largest amount in the history of the Student Games after last summer’s Universiade 2011 in Shenzhen, where the Chinese spent a staggering 22 billion euros.

However, Russia’s Minister of Sport Vitaly Mutko emphasised that this money was not just spent on a two-week tournament, but on development in Kazan as an investment for the future.

“That money, where was it spent? On a brand new infrastructure : airport, terminal, train connections between airport and the city, new roads and junctions, three new metro stations. You can see and touch what people will use every day. And yes, we also built 30 new sport venues,” said Russia’s Minister of Sport Vitaly Mutko

Russians make no secret of the fact that the organisation of the Student Games has been used as a dry run for the preparations for the Winter Olympics, which will be hosted in Sochi next February.

“For example, the security system – it’s a global programme under the control of the Federal centre and the organising committee is cooperating with it. Of course we will copy it. Transport logistics, the accreditation system, the organization of services for the athletes including nutrition…other things we do here will be used in Sochi,” said Mutko.

The vice-president of the International University Sport Federation Stefan Berg is elated. It looks like he does not have any reason to regret his decision to support Kazan’s bid for hosting Universiade 2013.

“After a few days being here I’m very satisfied. It’s been a high-level event so far. There’s strong commitment from the organising committee and good volunteers. Everything’s working very well so far,” he said.

If for the officials the lighting of the torch at the main stadium and the beginning of the tournament means they can take a breather, for the direct participants all the worries are just ahead.

One of the five sports that debuted at this year’s Universiade is Belt Wrestling.

“Two wrestlers get into position in a clinch – right hand goes under, left hand above the belt of the opponent and they clasp behind his rival’s back. From that position they have to manage to throw each other,” explained the head coach of Team Russia Belt Wrestling, Adip Valemeev.

The Pommel Horse event offers one ride closer to taking part as a gymnast at the Summer Olympic Games.

“Every gymnast wants to compete in the Olympic Games, that’s what everybody trains for. After I finish studying I will do full-time training and ultimately go to the Olympic games. There’s still the world championships first, I hope to get into the team for that. And then Rio 2016,” said British gymnast Ashley Watson.

And those dreams are not groundless, according to the president of Russia’s Student Sport Union Oleg Matycin. Universiades has distinguished itself as a proving ground for young athletes to step up to a higher level.

“We can see that lately teams have begun inviting to their Universiade squads boys and girls who frequently become Olympic and world champions later,” he says.

The Russian student team, with more than 20 Olympic champions in its ranks, is a favourite to come top of the medals table. But the fundamental success in Kazan has already been won by the Russians, and that is the Universiade itself.