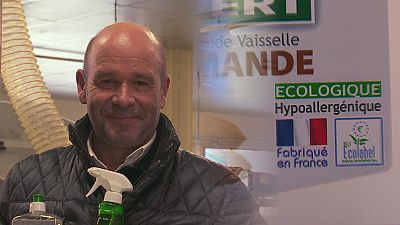 In this edition of Business Planet, we visit the French city of Poitiers to take a closer look at the European Ecolabel.

For consumers, the label is a reference that helps them identify more than 17,000 products that have a reduced impact on the environment. For entrepreneurs, it is both a commitment to the planet and a good way of boosting business.

The French company l’Arbre Vert is an Ecolabel pioneer. It was the first to obtain certification for shampoos and shower gels.

But it owes its success to the sale of cleaning products such as dish-washing and washing-up liquid, which opened up the business to large retail outlets around a decade ago.

Annual turnover has since grown from a few hundred thousand euros to 26 million euros. The company is now the leader for certified ecological cleaning products on the French market.

“At the start of the 21st century, there weren’t many certified products on the market. There was a lot of greenwashing. The first products certified on an international scale were ours. And that’s thanks to the Ecolabel,” said Michel Leuthy, CEO of Novamex-L’Arbre Vert.

As an Ecolabeled company, L’Arbre Vert is frequently audited. The company invests large sums in research and development.

“We have seven researchers working on innovative formulas. We spend more than one million euros per year on R&D,” says Michel Leuthy.

The European Ecolabel is the only official ecological certification valid throughout the European Union. It is delivered by independent organisations and guarantees the ecological quality of the product throughout its lifecycle.

In addition – and this is just as important – the Ecolabel ensures product performance.

“On the one hand, the Ecolabel is a guarantee that the product is as good as any standard product. It also guarantees that you won’t need to use twice as much to get the same result,” explained Emilie Machefaux, from ADEME, the French Agency for Environment and Energy Management.

There are around 50 categories of products or services likely to obtain an Ecolabel. Criteria can vary, however.

“It ranges from graphic paper to paint, textiles, mattresses… the criteria for handing out a European Ecolabel are specific to each product category,” according to Emilie Machefaux.

In conclusion, Michel Leuthy, CEO of Novamex-L’Arbre Vert told euronews: “For me, the Ecolabel was one of the keys to success because it backs up my environmental claims. But don’t forget: it’s your ability to innovate that will make you stand out.”

Scientists call for 'radical rethink' of tech's role in health

How has COVID affected workers?