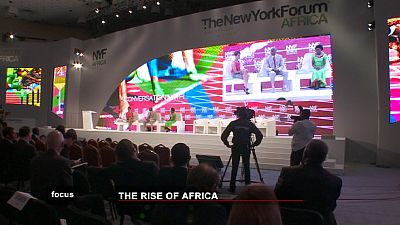 It is time to look at Africa with fresh eyes. There is a spirit of optimism on this continent of over a billion people. The World Bank says sub-Saharan Africa will be the only region to accelerate its growth in 2012 with GDP up 5.5 precent. During the last decade, Africa had six of the 10 countries that experienced the fastest growth, like a performance in Asia.

Eight hundred people came to Libreville in Gabon to talk about that. International opinion formers, leaders from business, economics and politics, all met at the invitation of the New York Forum Africa organised by Richard Attias. It was the first gathering of its kind.

The goal was ambitious: to advance practical solutions and legal proposals to allow Africa to at last take its place on the world stage with this question to start: African growth is it a myth or reality?

“Africa is moving now from a little over a billion people to in thirty or forty years two billion people it will be the largest consumer market in the world. That, you know and more of those consumers are going to come into a position where they have disposable income, that alone is going to attract business from all around the world. Plus Africa has what the rest of the world needs in terms of energy and in terms of raw materials. It is inevitable, the thing that was missing before was stable progressive leadership at the top of government,” said Richard Parsons. former chairman of Citigroup.

Jean Ping. Chairperson, Commission for the African Union explained: “When you see people who have a feel for business, like George Soros who saw very early opportunities in Asia and Malaysia, come to Africa and create a think tank, it is because they feel this is a sustainable growth.”

Shantayanan Devarajan. Chief Economist, World Bank said: “This high accelerated growth rate, has helped the figures for poverty. For the first time, the number of poor has begun to decline. From 2005 to 2008, we found that 9 million Africans have moved out of poverty. This represents the population of Bénin.”

How can this good performance be maintained?
The speakers called for nations to stick with prudent economic policies to attract a broader range of investors. Another problem is infrastructure. Like bridges thrown between two banks, they must be strengthened in order to optimise the flow of goods and people.
And finally, it is imperative to further improve security and good governance.

“The more you bring a diversification of investors , the more you can create a sense of well-being and can ask a country to improve its governance. People are migrating increasingly to urban areas where economic welfare is certainly very low but, hopefully, is improving, “ opined Ariane de Rothschild. CEO, Edmond de Rothschild Holding

Any development increases inequality. Africa is a land of solidarity, it must find a way to offer support to people. Improving the status of women is one way. This is a corollary of economic development. And it will set an example of how human capital should be valued. One woman attening the forum said, “It is women who work the hardest. I think if they mobilise, if they organise themselves, if they plan their activities better and provide the means necessary to move the continent, then the economic boom of Africa will happen “

Vickie Remoe. Creative Director, How4do Productions said “There is a story of the guy who started the first national petroleum company in Nigeria and it is a multi million dollar company and when you hear stories of that of home grown ingenuity and home grown business development whether you are in Sierre Leone, Nigeria or Eritrea or wherever you are on the continent when you hear stories of other people’s success it makes you believe in the possibility of your own success and the possibility of your own dream becoming a reality.”

Africa is also growing because it relies on a new generation of entrepreneurs. They were trained abroad. Perhaps too there is a need to professionalise education at the heart of the continent, so that designers, contractors and developers do not leave. Like the Congolese Verone Mankou, whose touch pad is distributed in Europe and is admired and copied.

“Africa is the only continent in the world where in technology, we can think about a 4-digit growth. We know it will happen. I believe and I know that many others believe too. And not just in the technology sector, but across all sectors. We see young people who are beginning to invest in good projects in their country and I think this is wonderful,” said Verone Mankou,.CEO, VMK

Our correspondent at the Forum, François Chignac said “Just like the digital tablet, designed, developed and distributed on the African continent to international standards, the economic boom in Africa today is no longer a myth but indeed a reality.

‘For three days, the debates of the New York Forum Africa have endorsed the new economic model. See you then in a year, here in Libreville, where what was once seen as a land of chaos will become a new economic, social and political model.”