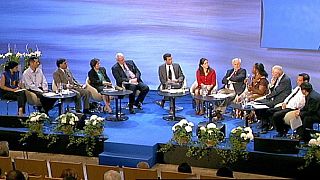 This year’s World Water Week in Stockholm focusses on water resources in a rapidly urbanising World. On the mayors’ panel, city managers from all over the world exchanged their experiences and ideas on how to keep providing drinking water to fast growing urban populations while clean water is becoming a scarce resource.

Cities are dynamic magnets for growth, migration, innovation, culture and finance – but also for pollution and consumption. For each person who is born in or moves to the countryside, 19 will come into the city. By 2050, urban residents will account for 80 per cent of all people on the planet and they will outnumber our entire global population today.

This will shift the dynamics of where, and how, water will flow for domestic, industrial and agricultural needs. On a local level, the challenges and opportunities this will present fall upon the shoulders of one person more than any other: the mayor.

World Water Week is hosted and organised by the Stockholm International Water Institute (SIWI) and takes place each year in Stockholm. The World Water Week has been the annual focal point for the globe’s water issues since 1991.