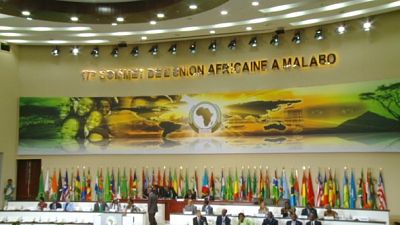 Libya, Ivory Coast, South Sudan, Zimbabwe – recent events in Africa, many of them very violent, have burst onto the international stage. And in Equatorial Guinea at the 17th Summit of the African Union, all of these issues were on the table.

The brand new Sipopo development, which housed the conference, is the pride of the regime. A regime for which this summit was a sort of diplomatic baptism having been ostracised for many years due to its appalling Human Rights record.

The summit was in sort a three-day opportunity to re-affirm links between the Member States – which seemed on the verge of implosion. On the subject of the Ivory Coast crisis, Goodluck Jonathan, the president of Nigeria, favoured using force to dislodge ex-President Gbagbo. But Jacob Zuma, the President of South Africa, favoured negotiation, to the extent that he was accused of being pro-Gbagbo.

Three months later, the rift is forgotten and both men are united. The new Ivory Coast president Alassane Ouattara, who was supported throughout by the African Union, attended the summit for the first time as president and said, “Yes, I think we’re getting there. It’s a young Union so things take a little time but it’s going well.”

Libya was another highly sensitive subject on the table, casting a shadow over the whole summit. The Union struggled to find a common position. Gadaffi has been a generous donor to the African Union and to many heads of African states. So some delegations still felt loyal to him. Others wanted his head. The UN campaign undertaken by NATO was condemned. But this didn’t worry the representatives from the Libyan National Transitional Council.

Abderrahman Chalgham of the Libyan National Transitional Council said, “Now I can say: not the majority, but a lot of states are openly with us. They said even in the closed session that Gaddafi should step down, and go out. But no-one is supporting Gaddafi, no-one indoors or outdoors.”

Behind closed doors, discussions were punctuated by raised voices. Ethiopia, Nigeria, Rwanda, and Ivory Coast wanted the African Union to adopt a harder line on Gadaffi. But in vain. 25 speakers took to the podium during the often heated debates and finally a minimal agreement was thrashed out.

Jean Ping, African Union Commissioner, said, “Crises like Libya, crises like Ivory Coast, crises like Sudan or Somalia… all these crises have to be tackled at a precise moment when Africa, like all continents, has points of view which aren’t necessarily the same. But after long debates and negotiations, we have agreed a common position.”

It’s a very diluted agreement however. The African Union proposes to organise spokespeople to work for peace between the Libyan regime and the opposition. But no mention was made of any future role for Gadaffi. Achieving a common position was enough.

Mahamadou Issoufou, the president of Niger said, “Africa comes out of this summit united. United on all the major questions especially relating to the Libyan crisis. We have adopted a position unanimously.”

And on the street? With a population of around a billion people, Africa is the seventh largest population in the world. But it is the poorest. And the people here live in developing democracies and fully-fledged dictatorships, where money laundering is flagrant. So is there any point to the African Union?

The Union is pulled in many directions. But if any organisation can improve the future of Africa, it really is the African Union. But for that to happen, the leaders have to overcome their own challenges and those of their neighbours whilst simultaneously encouraging ordiary Africans to use their ingenuity to build their own, bright, future.