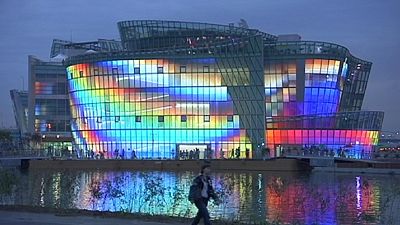 The South Korean capital Seoul is now home to the world’s largest artificial floating island, recently opened on the Han river. It is made up of three inter-connected centres for concerts, conventions, exhibitions, water sports and restaurants. The authorities hope the island will become a major attraction for South Koreans and foreign visitors alike.

The public and private-funded project has cost the equivalent of more than 60 million euros and is at the heart of a major river renaissance plan.

Choi Heung-Soon, with the Seoul Metropolitan Government, said: “The north and south sides of the river have been developed with housing, and the river was only something to look at in this area. But now, with the floating island, we can really make use of it and create a new culture.”

The Han river was a major part of life in the capital in previous decades, but officials admit that for a time it was not given the attention it deserved.

Now there are numerous projects next to and on the water, to ensure the Han remains an important focal point. The riverbanks are also being transformed into parks and public spaces.

From the drawing board to the opening of the floating island, there were months of painstaking work. The central challenge was how to keep three heavy structures afloat, using only giant buoys and mooring chains. The whole thing also had to be environmentally friendly.

The man in charge of the design and construction said revolutionary technology had to be found to minimise risks.

Choy Won Cheol of Daewoo Engineering & Construction said: “The Han river reaches 16 metres during summer floods, when the water levels go up. And of course during the floods the island must stay afloat, which requires technology that is quite complex. The island weighs almost 4,000 tonnes.”

A kind of GPS system is supposed to keep the different parts of the island stable; one slight variation in position triggers an automatic correction system.

Several artificial islands exist in other parts of the world, but none as large as this one, relying completely on buoyancy.

Old timers are among the first to be impressed. One said: “The Han river is very clean, and I am proud as a Seoul citizen that this nice island has been built on it.”

And another: “At first I thought it cost too much, so I didn’t really like it, but now seeing the finished product I think it’s good.”

The young are also enthusiastic. One little girl said: “I think it’s nice. It’s like an island floating in the sky. It’s amazing!”

Two young women said: “It’s like something from overseas. It looks great.” “I think it’s modern and beautiful to look at. Seeing it up close is much better than just hearing about it.”

The three sections of the island have been given names. The largest has been called Vista, the smallest, Terra. The third is called Viva.

Another feature of the floating island is a giant outdoor stage and screen. With South Korea facing tough competition from other countries vying to host world events, high hopes are riding on this venture.

Jo Deokhyun with the Korea Tourism Organisation said: “There has been no place like floating island along the Han River where we can host international meetings and conventions, although it is one of the most popular places for Koreans and for foreign visitors as well.”

The island can accommodate thousands of people, with 700 in one conference venue alone. Not just local residents are showing interest in the new site.

Foreign visitors said: “When I first heard about it I was really curious because I was actually wondering what it was made of, and if it actually was floating.”

And: “I just think it’s really unique. It’s fun to look at.”

Visitors will find it even more fun to look at when the sun goes down, when the light displays work their magic. The floating island is also just metres away from another popular attraction in the South Korean capital: the water and light show on the Banpo Bridge.

While the official opening of the island has already taken place, managers say some work is still being done, to have everything completely functional by September.