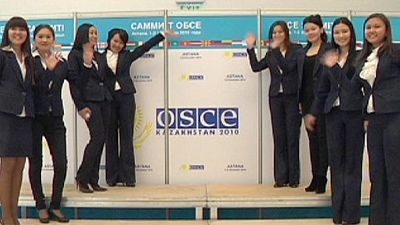 The Organisation for Security and Cooperation in Europe, the OSCE, is convening for its first summit for 11 years. It’s being held on the first two days in December in Astana, the capital of Kazakhstan.

All 56 OSCE members, from across the northern hemispere are to discuss ways of mutually improving security through fighting terrorism and organised crime, preventing conflicts and promoting democracy and human rights.

For Kazakhstan it’s a chance to prove its diplomatic credentials and show that the world’s traditional powers need now more than ever the help of emerging economies.

“Each country has its own concerns but then you have this economic crisis which led to the formation of the G20, so it became clear that only together with developing countries can joint solutions be found for the economic problems. Now you have a closer relationship between Russia and the United States; they understand that they have to work more closely if they want to tackle their problems, but when you talk about such crucial things as security, the fight against terrorism, illegal drug trafficking, you have to understand that only working together, shoulder to shoulder, can we work against these efficiently.”

As the summit’s promotional TV ad shows, the event is a proud moment for a fledgling state, a key opportunity for Kazakhstan to make itself heard above its powerful neighbours Russia and China. For the European Union, it’s a chance to adjust its geopolitical borders, says political analyst Anar Khamzayeva:

“It comes at a very important time when European Union and Russia, and Russia-Nato are rethinking, restructuring their relationship. So the coming summit is more about the EU-Atlantic, Eurasian security environment and how the Russian initiatives on European security will be viewed, and there has already been much progress on this and I think the summit comes in a positive light for all these developments. Countries now are recognizing that there is a need for a multilateral approach to addressing common challenges and threats.”

To achieve peace and security, the OSCE seeks to establish free and open societies.

Its ambassador in Astana, Alexandre Keltchewsky, insists on one central message: development requires democracy and human rights. He told us:

“Those Central Asian countries call on their traditions but were also very quick to adapt to mobile phones and computers. Apparently though it’s more difficult for them to adapt to concepts such as the respect of human rights, civil freedoms and free elections. It’s a problem of mentality and a problem of power, particularly in Central Asia. There, you must be aware that with perhaps the exception of Kyrgyzstan, which is starting to make progress in that domain, none of these countries has really put in place a system whereby power changes hands regularly.”

The OSCE is a deliberative body that is unable to impose sanctions or military power to enforce its resolutions. So promotion of democracy can only take place by the slow process of discussion and networking at summits like the one in Astana.

But as Michael Emerson, an analyst at the Centre for European Policy Studies believes, the culture gap often makes this difficult.

“The democratisation of the wider OSCE space is an important political objective of the European Union, for the Central Asian countries themselves, these are authoritarian regimes who don’t want to be troubled by the complications of democracy,” he says.

For Kazakh president Nazarbayev, Europe should not be able to reserve the right to dictate the terms of human rights and democracy:

“When some European countries give their assessment on the human rights situation in Central Asia, they sometimes use definitions from the Cold War era. They say that the countries of this part of the world, they are autocratic, but when they speak about the Western countries it looks like they all are angels of democracy. They all use double standards, you see we have the same problems in this part of the world as in the European countries but they assess them differently,” he told us.

The hosts are pulling out all the stops to welcome their guests. Kazakhstan hopes the summit will make it a key player in Central Asia, a region that is of increasing interest for Europe.

Whether the OSCE is a toothless remnant of the Cold War or a useful forum to open up Europe’s relationship with Central Asian neighbours may become clear over the course of the Astana summit.