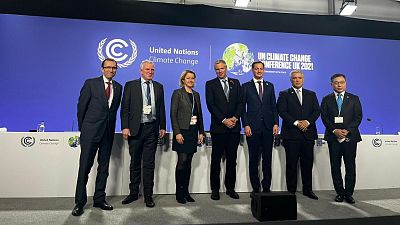 Colombia has made an ambitious commitment to declare 30 per cent of its territory a protected area by 2022 - eight years earlier than originally planned.

“This meeting is historic. It’s historical because it’s about the mobilisation of resources to protect the natural world,” said Colombia’s President Duque.

“Today, we acknowledge that if we really want to cut down emissions by 2030 and reach carbon neutrality, we have to put the concept of nature positive in our minds and hearts.

“That is why Colombia today, it's announced that we're not going to wait until 2030, we have 30 per cent of our territory being declared a protected area. We're going to achieve this in 2022.”

An incredible and major move from these biodiversity leaders.

Around 50 per cent of Colombia’s land is covered by tropical rainforest and the country has over half of the world’s high altitude ecosystems.

"This is a significant announcement – not least for the urgency shown in pledging to do it within 12 months," says Tom Stevens, Senior Programme Manager for Nature Based Solutions and Climate Finance, at Fauna & Flora International (FFI)

"Climate change threatens livelihoods and fresh water systems in Colombia, where cloud forests provide 70 per cent of water to the population.

If this pledge can be met, then protecting more land can be a double-win: mitigating global warming and helping the country cope with its effects.

"Keeping those forests standing sequesters carbon at the same time as guaranteeing supplies of drinking water and hydropower. If this pledge can be met, then protecting more land can be a double-win: mitigating global warming and helping the country cope with its effects.”

The announcement comes as the first major deal of COP26 is agreed with more than 100 world leaders committing to ending deforestation by 2030.

They represent over 85 per cent of the planet’s forests including a large part of the Amazon rainforest.

How is Colombia financing its land protection?

Duque added that the most important objective was not only to reach the 30 per cent protection of Colombia’s territory but to back it with green finance.

A report from Global Witness earlier this month highlighted how major banks in the UK, EU and US have earned more than €15 billion from deforestation activities since 2015.

He added that any pledge of public money could not come close to matching the amount that is currently being invested in the causes of deforestation.

There's no doubt that we need to address the supply chains and investment in the private sector.

Lord Goldsmith said that the commitments made today by financial institutes to bring their portfolios in line with Paris targets and other climate goals were important.

Together, they represent around $90 trillion (€77 trillion) worth of investment and have been instrumental in getting 114 countries to sign up to the forest protection pledge.

“There's no doubt that we need to address the supply chains and investment in the private sector.”