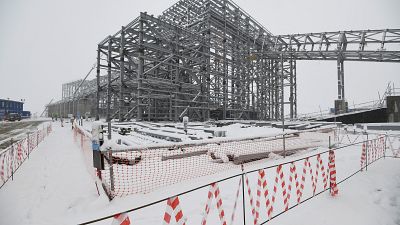 A view of the Udokan copper industrial complex under construction in eastern Siberia's Zabaikalsky region.   -   Copyright  NATALIA KOLESNIKOVA/AFP or licensors
By Josephine Joly  with AFP  •  Updated: 11/10/2021

The price of copper, dubbed the "new black gold", soared to historic heights this year, pushing Russia to reopen an old Siberian mine that had been left dormant for decades.

First dug in 1949 when a Soviet expedition in Siberia was looking for uranium to supply its national nuclear arsenal, the expedition stumbled instead on a vast deposit of copper.

Technology back then limited the excavation of the precious metal, but with 21st-century mining machinery, operations are due to launch next year.

"The Soviet Union wasn't able to develop these deposits," said Valery Kazikayev, chairman of Udokan Copper, the company developing the mine.

Constructions at the site began in 2019.

The mine, located 6,500 kilometres away from Moscow, is both in a seismic zone and on permafrost, meaning that the ground remains completely frozen all year round.

Temperatures can drop to minus 60 degrees Celsius in winter.

Temperatures can drop to minus 60 degrees Celsius in winter, but workers continue to operate nonetheless.

"We continue working in winter as well, as temperatures plunge below zero. However, the cranes stop working when it's negative 35°C though, as hydraulics freeze. And we stop working under low visibility conditions - if it’s lower than 50 metres - the works stop. Otherwise, we work 24/7," declared Yaschuk.

Copper being key to the world's energy transition away from carbon, the hope is it will be a boom for Russia and beyond.

"The project is a long-awaited event in the life of the Far East and the entire mining industry of Russia and the world," Kazikayev added.

Holding more than 26 million tonnes of copper, the mine claims to be the largest untapped deposit in Russia and the third-largest in the world.

As well as its copper deposits, the new excavation is an optimal location to move the unearthed metal to the lucrative Asian market.

"From here we can reach the Chinese border and northern China using the nearby BAM railway, as well as our seaports to deliver our products to southern China, Korea, and Japan," Kazikayev said.

Copper being key to the world's energy transition away from carbon, the hope is it will be a boom for Russia and beyond.

Demand for the metal is expected to continue growing due to its use in green energy technologies.

"Over the next 15 years, the demand for copper will grow by 30 per cent," noted Yulia Buchneva, an analyst at Fitch Ratings in Moscow.

Copper plays a key role in renewable energies and green technologies, she explained, because of its thermal and electrical conductivity properties.

She cited, in particular, the growing production of electric vehicles, which rely on copper.

To develop the project, Udokan Copper - which purchased the license in 2008 and is part of billionaire Alisher Usmanov's USM holding company - raised nearly €2.5 billion from Russian banks.