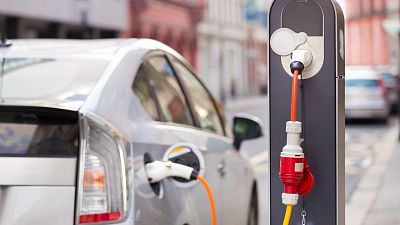 The UK has announced plans to include an electric car charging port in every new home it builds. But is it wrong to focus so much of its energy on electric cars, when other sustainability goals may be more important?

Last week, the British government confirmed legislation will be introduced to require any newly built home to have a charging point installed as standard. The rule is expected to come into force in 2022.

The government’s goal to remove fossil-fuel cars from the roads has had the brakes put on it by the slow up-take of charging infrastructure across the country so far.

There are just 25,000 public charging points installed across the UK right now. Far from the number needed to meet the demand of 30 million electric cars.

The political pressure for charging points

The pressure to bring more electric car infrastructure to the UK isn’t just based on the government’s own initiative though.

Electric car makers have lobbied heavily for policies that benefit their companies.

Earlier this year, The Guardian revealed that Tesla had lobbied the UK for a raise in fuel duty and higher taxes on petrol and diesel cars, as well as subsidies for electric vehicles.

“Supporting zero-emissions vehicle uptake via mechanisms to make new fossil-fuelled cars pay for the damage they cause is entirely reasonable and logical,” Tesla wrote in its proposal to the government.

The government may have responded warmly to this proposal because of the large amount of infrastructure work Tesla has already carried out across the UK.

Alongside this, Dutch charging infrastructure company Fastned, agreed to build 38 charging stations across Oxford last year. Activities like this will have been likely to make the government more sympathetic to Tesla’s demands.

Is the charging point plan the best sustainable future for Britain?

But just how beneficial is the UK’s focus on electric vehicles for its sustainability goals? And are more useful goals being overlooked by the current focus on charging points?

Concerns have already been raised over the unequal distribution of charging points. The Competition and Market Authority (CMA) has branded the availability of chargers a “postcode lottery” with rural areas at risk of being left out.

The CMA has voiced concern with the slow roll-out of public street chargers. The issue of flat-owners getting access to charging points is also the chief problem for an Ordinance Survey Hackathon in order to make electric vehicle infrastructure accessible to the whole population.

The CMA opened an investigation into competition questions over the exclusivity deals between charger supplier Electric Highway and three service station operators – Extra, Moto and Roadchef.

While the proposed legislation requires new-builds to have an electric car charging port, it is also worth asking why there aren’t more sustainability requirements being made of new-builds.

Tighter rules are being implemented that require new homes to produce 31 per cent less carbon dioxide than the current average. Although this rule is expected to see an increase in the use of solar panels for home energy creation, could solar panels also benefit from a similar initiative like the charging ports rule?

Scotland forced new-builds to reduce their CO2 output by 22 per cent in 2015, around the same time that England abandoned plans for a Net Zero Homes standard.

Since then, 80 per cent of new homes in Scotland have featured solar panels, showing that directives that encourage the technology do work. If the UK as a whole wants to meet its emissions targets, then it needs to look further than charging point installation.