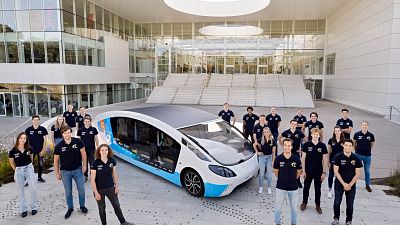 This week, a completely solar-powered mobile home will travel thousands of kilometres across Europe.

Embarking on a journey from the Netherlands to the tip of southern Spain, it will carry the students that dreamt up the idea along for the trip.

The vehicle-come-holiday-home can generate enough solar electricity to drive 730 kilometres on a sunny day and has been named Stella Vita by Solar Team Eindhoven.

Unveiling the vehicle to a room full of students, Kjell Revenberg, team manager of Solar Team Eindhoven explained, "they are the future, the next generation and can encourage and accelerate the transition to a more sustainable future.”

The plan, according to Revenberg, is to accelerate this transition by inspiring as many people in Europe as possible during the 3000-kilometre journey.

Solar Team Eindhoven will stop at cities along the way, putting on events and inviting passers-by to see how Stella Vita works.

Without any external charging points or need for fuel, students say the vehicle’s solar panels can power everything found on board.

And according to account and finance manager, Kevin Smolenaars, the mobile home is completely self-sufficient in terms of energy.

“Through solar panels on the roof, it is independent of charging stations. The vehicle generates enough solar energy to drive, shower, watch TV, charge your laptop and make coffee,” he explains.

With a shower, kitchen, sleeping area and cockpit, Stella Vita can also be expanded when parked to provide space to comfortably stand up. When the roof is raised, more solar panels can be folded out, doubling the solar surface to as much as 17.5 square metres.

This isn’t the student’s first creation. Since developing their first prototype in 2013, past projects have included the world’s first road-legal five-seater solar car and its successor Stella Lux, a car that made more power than it consumed.

This previous project, also named after the Latin word for star, could travel at 1000 kilometres on solar power alone.

Though technically not yet equipped with all the necessary safety features to be considered road legal, commentators have described Stella Vita as an interesting test for future technology.

“We know that solar on moving vehicles is not ideal, but a deployable system for when stationary is something that could be very valuable,” writes Electreck Editor-In-Chief Frank Lambert.

Solar panels are becoming a familiar addition to both mobile homes and caravans, but technology that has the power to provide completely self-sustaining renewable mobile vehicles is still largely in its infancy.

The students set off on their month-long trip through Europe on September 19th.