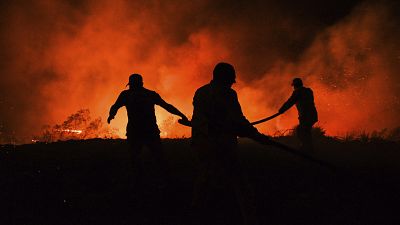 Firefighters and local villagers try to bring a fire under control in the village of Kirli.   -   Copyright  AP Photo
By Euronews  with AP, AFP  •  Updated: 30/07/2021

At least four people have been killed in southern Turkey as forest fires rage near tourist coastal regions for a third day.

But authorities say the majority have been brought under control and that the situation with active fires is "improving".

More than 50 others wildfires that broke out since Wednesday amid strong winds and scorching heat were extinguished.

The worst fires hit the Manavgat and Akseki regions in Antalya province, where an 82-year-old man and a married couple died. More than 50 people were hospitalised and at least 25 villages or districts were evacuated.

The Turkish government’s Disaster and Emergency Management Presidency (AFAD) said that at least 112 people were "affected" by the fires, including 58 who were hospitalised, mostly for smoke inhalation and burns.

Meanwhile, a 25-year-old volunteer died in another fire near the resort of Marmaris late on Thursday.

Images showed flames briefly threatening holiday homes and beach resorts near the town of Bodrum, where some guests were evacuated by boat.

Fahrettin Altun, the Turkish presidential communications director, said "comprehensive investigations" had been launched into the cause of the fire.

More than 4,000 firefighters, assisted by helicopters and planes, are trying to bring the fires under control. The Russian embassy also on Thursday that three water bombers were assisting in the firefighting operations.

Azerbaijan announced it would send 500 emergency workers, helicopters and other equipment to help. Neighbouring Greece and France have also offered help.

Janez Lenarcic, the European Commissioner for Crisis Management, said on Friday that the bloc is "following the wildfires on Turkey's Mediterranean and Aegean coasts with great concern."

"I am conveying my condolences to all those who have lost their loved ones."

"We stand ready to help," he added.

On Thursday, authorities also rescued 10 people who were stranded on a boat at the Oymapinar dam near Akseki.

"All necessary support will be given to our citizens who suffered from the fire," Turkish President Recep Tayyip Erdogan said on Wednesday evening.

The mayor for Marmaris said he couldn’t rule out "sabotage" as a cause for the fire there. In other provinces, authorities declared a ban on people entering forests in a bid to prevent more fires.

Wildfires are common in Turkey’s Mediterranean and Aegean regions during the arid summer months, although some previous forest fires have been blamed on arson or outlawed Kurdish militants.

The Antalya region is a popular vacation destination for tourists from Russia and other parts of Europe.