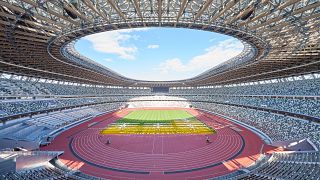 Japan has every right to be proud of its ancient heritage sitting comfortably alongside a passion for modernity. Centuries-old Shinto shrines nestle between glass skyscrapers, while traditional ryokans (inns) and teahouses compete with capsule hotels and robot cafés.

In the countryside, 285 kph bullet trains speed past cherry orchards which have barely changed for hundreds of years.

The 2020 Tokyo Olympic and Paralympic Games are a natural extension of Japan’s unique blend of old and new, say the Games’ organisers. Right from when the Games were awarded in 2013, the vision has been to build on Tokyo’s ancient cultural heritage whilst aiming to accelerate the city’s transition to a carbon neutral, sustainable future.

Historic sports facilities such as the iconic Nippon Budokan - spiritual home of Japanese martial arts - sit beside brand new venues built with the latest sustainable technology. Under the banner 'Be better, together – For the planet and the people', Tokyo 2020 is showcasing solutions for a sustainable society.

The 2020 Tokyo Olympic and Paralympic Games are a natural extension of Japan’s unique blend of old and new,

“The world today is beset by many challenges of a global scale. […] People all around the world are pushing radical socio-economic reforms to solve these challenges and create a sustainable, inclusive society,” says the latest update to the pre-Games sustainability report, released just two weeks before the Opening Ceremony. “Sustainability has grown in our collective consciousness and as a topic of interest worldwide. Because of this, people are looking to the Tokyo 2020 Games to play a significant role in addressing the challenges of creating a sustainable society.”

“Tokyo has a rich heritage and has shown its capacity to innovate, for example at the Olympic Games 1964. This time, the Games will accelerate the city’s move to a more sustainable future,” says Marie Sallois, IOC Director for Sustainability.

The two main Olympic zones have been designed with these principles in mind. According to the organisers, the Heritage Zone “houses several iconic venues used at the Tokyo 1964 Games and further sustains the enduring legacy of Tokyo 1964” while the Tokyo Bay Zone “serves as a model for innovative urban development and symbolises the exciting future of the city.”

In the Heritage Zone, several sites have been repurposed and retro-fitted with advanced building technology to save energy. These include table tennis at the Tokyo Metropolitan Gymnasium - built in 1954 for the World Wrestling Championships and host to gymnastics and water polo in 1964 - and the Nippon Budokan, the world-famous judo venue which this year will also see karate for the first time. The Yoyogi National Stadium - famous for its distinctive design and suspended roof - has been adapted from a swimming and basketball venue to host handball, as well as Paralympic rugby and badminton.

This year’s opening and closing ceremonies, track and field athletics and women’s football final all take place in the Japan National Stadium, built on the site of the old national stadium which hosted the 1964 Games. Further afield, equestrian events will take place at the same facility used for the 1964 games.

Just eight of the 43 competition venues have been built from scratch, 10 are temporary, and 25 are being reused.

“The IOC’s Olympic Agenda 2020 and Olympic Agenda+5 – the strategic roadmaps for the future of the Olympic Movement – require host cities to make maximum use of existing venues, which reduces both carbon emissions and construction costs,” says Marie Sallois, IOC Director for Corporate and Sustainable Development.

“It is the Games that adapt to their host and not the other way around. In line with this approach, Tokyo 2020 has minimised new construction, and maximised the use of existing and temporary venues - just eight of the 43 competition venues have been built from scratch, 10 are temporary, and 25 are being reused.”

Building for the future

If the Heritage Zone represents tradition, the Tokyo Bay Zone - built on several artificial islands - is an ultra-modern urban development. Among the 16 venues here are the Ariake Gymnastics Centre and the Tokyo Aquatics Centre, which uses state-of-the-art technology to adjust the length and depth of its pools by moving floors and walls. In addition, it is powered by solar energy and a ground heat exchanger.

Embodying the spirit of ‘tradition meets innovation’, the Olympic Village lies on reclaimed land at the intersection of the Heritage and Tokyo Bay zones. Hydrogen-fuelled electricity and hot water will be used in dormitories, cafeterias and training facilities for the 11,000 athletes competing at the Tokyo 2020 Games.

After the Games, the village will be turned into hydrogen powered flats, a school, shops and other facilities. Designed to demonstrate an urban lifestyle that is environmentally friendly, inclusive and technologically advanced, the Olympic Village has seaside parks and other green spaces that add to the quality of life.

The Games will create a cultural legacy for Tokyo’s people too.

Although necessarily curtailed by COVID-19 restrictions, the Olympic Agora in the historic Nihonbashi district links sport and culture, inspired by the public meeting places of Ancient Greece – or “agoras”. Nihonbashi has been a lively neighbourhood for more than four centuries, a major crossroads of commerce, culture and ideas.

With a series of art installations, exhibitions and digital programmes celebrating Olympism, the Agora aims to revitalise the district by developing modern multi-purpose urban spaces and facilities for the future.

“Following an unprecedented one-year postponement due to the pandemic and in the wake of the major impact on people’s lives around the world, the Tokyo 2020 Games have taken on new significance as a symbol of unity and solidarity,” says Tokyo 2020 President HASHIMOTO Seiko, commenting on the release of the Tokyo 2020’s Update to Sustainability Pre-Games Report.

“We are doing everything we can to support the realisation of a society where everybody can thrive. We hope that our approach to addressing what are universal sustainability challenges becomes part of the legacy of the Games.”