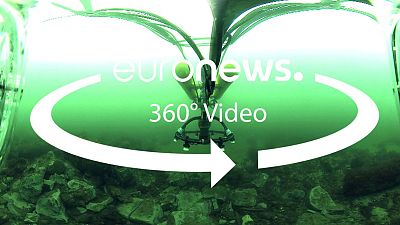 A ticking time bomb is lying beneath the surface of many European seas. Countless pieces of rusting munitions have been lost or intentionally dumped on the seafloor during the course of the 20th century.

The location of these deadly dumping grounds is often poorly documented. It's estimated that German parts of the North Sea and the Baltic Sea alone contain some 1.6 million metric tonnes of relic munitions.

These conventional and chemical weapons threaten human life and the marine environment. They endanger fishing and navigation, impeding the development of offshore energy, aquaculture, shipping, tourism and other sectors of the blue economy.

The European Union supports research projects that aim to find and clear undersea munitions. For example, underwater drones are used to study the Kolberger Heide marine dumpsite in the Baltic Sea near the city of Kiel.

In that area alone, there are some 30,000 tonnes of rusting sea mines, aerial bombs, torpedo heads and other munitions that have been dumped in large piles or scattered on the seafloor.

On the bottom of the sea, crumbling chunks, that may seem like natural marine decay to the untrained eye, are actually exposed pieces of TNT and other explosives in this part of the ocean. These former weapons slowly decay, releasing harmful substances like cytotoxic, genotoxic, and carcinogenic chemicals into the water.

Various countries over the last century routinely dumped obsolete or unusable munitions, both conventional and chemical into the sea until 1975 when it was forbidden by the London convention.

The Convention on the Prevention of Marine Pollution by Dumping of Wastes and Other Matter 1972, otherwise known as the London Convention, was one of the first global conventions to protect the marine environment from human activity. It has been in force since 1975. Its main goals are to control sources of marine pollution and to prevent sea pollution caused by the dumping of wastes. 87 states are part of the convention.

Today, with growing shipping traffic and accelerating development of offshore pipelines, wind farms, and aquaculture, it’s urgent that we understand the scale of the problem to find ways to deal with it.