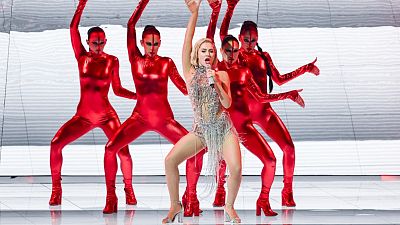 Eurovision and WWF have partnered up to gather one million voices for the planet ahead of the song contest final this Saturday.

Eurovision and WWF have enlisted the help of famous DJ Armin van Buuren to help encourage people to get involved with the project- he’s even using one of his own songs to do it.

Van Buuren says natural historian and presenter, David Attenborough has helped influence him to care more about the environment,

“He’s inspired me greatly throughout the years, helping me see how precious life on earth is and that we should do everything in our power to save it,” he says.

“I believe we all have that power; as long as we stand together, we’re able to inspire change and make a difference.”

On the 15th May the collaboration kicked off with van Buuren turning Rotterdam’s Erasmusbrug green. He was accompanied by the Executive Supervisor for the Eurovision Song Contest, Martin Österdahl and the CEO of WWF Netherlands, Kirsten Schuijt.

“Rotterdam is the place to be at the moment if you are a Eurovision Song Contest fan. The city and most of its locals are proud to be hosting the ESC.

“Together with Eurovision and all the fans, WWF hopes to gather as many voices as needed to give our planet a voice and have the call for urgent action for nature echo not just across our TV screens but around the world.”

The overall message to both Eurovision fans and environmentalists is that countries need to “open up to one another and unite”.

The partnership is using the TikTok to encourage diversity in the voices they have for the campaign and that users of the platform will sing, dance or duet with van Buuren’s track ‘Million Voices’.

Users of the popular social media platform are being encouraged to use the hashtag ‘#voicefortheplanet’ to get involved with the campaign as well as using van Buuren’s track.

I’ve teamed up with @wwf & @eurovision to launch the #voicefortheplanet challenge. Join in so you can be a voice for nature this #eurovision

Director General of WWF International, Marco Lambertini commented on how events of the past year have meant that this project is even more important and a chance for people to reunite.

“We’ve seen how the pandemic has forced us apart in so many ways, yet here is a great example of people coming together, united by music.”

“We also need to pull together and raise as many voices as possible for the Planet. A Planet which is in crisis because of our unsustainable activities. A planet whose health determines the health of us all,” says Lambertini.

553,000 people have already used their ‘voices’ to support the virtual campaign via WWF’s website and #voicefortheplanet already has 604.0K views on TikTok.

Eurovision 2021 kicks off with first semi-final