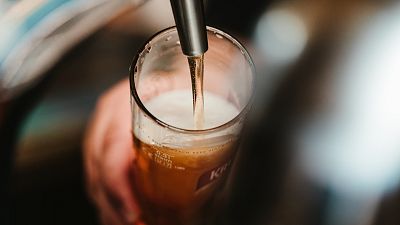 This beer has a unique taste which reminds drinkers about climate change is affecting the drinks industry   -   Copyright  Canva/Unsplash
By Sabrina Fearon Melville  •  Updated: 17/05/2021

The first American company to create a nationally distributed carbon neutral beer has come up with a new product which hopes to tackle the climate crisis.

The creators of New Belgium Co. are challenging the food and drink industry on their carbon consumption by launching a beer that has been described as ‘climate change in a can.’

This combination of ingredients makes for a smokey flavoured ale which could be the future taste of the beer industry if brands and business owners don’t update their plans to reflect the climate crisis.

The beer has been intentionally designed to taste horrible, using ‘the kind of ingredients that would be available in a climate-ravaged future’.

The beer industry is rich in the usage of grains, barley in particular, and high percentages of the crop will have a direct impact on the grain and farming industry, which is already under pressure due to climate change.

New Belgium Co. is hoping that its bold move will encourage larger beer businesses to do the same and help tackle the industry's carbon footprint in new ways which raise public awareness.

How has climate change affected the beer industry?

Increased droughts and extreme heat waves, a direct effect of climate change, have meant that the future of the barley crop is in increasing danger and as a result will begin to fluctuate in price, meaning more expensive beer and constantly changing crop prices.

At the moment Europe is one of the largest producers of barley in the world with Russia, Germany and France producing over 38 million tonnes of barley annually.

In the Mediterranean, scientists predict that barley production will decrease by 25 per cent to 8 per cent depending on climate projections.

What are other beer companies doing to tackle the climate crisis?

BrewDog - The Scottish beer company is committed to calling out big businesses who aren’t doing their part to combat their carbon footprint.

It also became the first international beer company to go carbon negative in 2020 and has started a tree planting campaign. Known as the BrewDog Forest, it is located in the Scottish Highlands and the business hopes it will be able to plant one million trees and restore around 650 acres of peatland.

Lion - The Australiasian department of this beer brand is hoping to connect more with its consumers by going green in its office spaces and factories. It hopes to reduce over 107,000 tonnes of carbon dioxide that it produces annually through brewing and general business upkeep, including cutting down on flying employees out for business meetings.

Carlsberg - With targets set for 2022 and 2030 respectively, beer giant Carlsberg hopes to use its new partnership with The Carbon Trust to decrease its environmental impact across their 150 global markets.

The brand currently hopes to achieve net-zero greenhouse gas emissions in all its breweries by 2030.