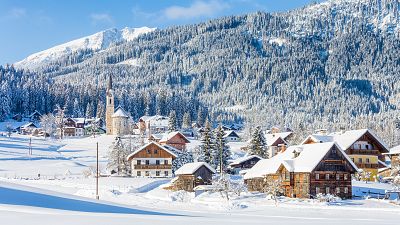 Tourism, energy production and water supplies are all tightly connected to snow availability. In a context of climate change, keeping an eye on snowfall is ever more important.

At the end of December 6, 2020, many slopes in Italy’s Dolomites and in southern Austria’s Alps sat under 3 metres of snow. A snowstorm had swept Southern Europe, hitting some of its high-altitude areas with near-record levels of 900 mm of snow in 24 hours. It blocked traffic, and boosted the risk of avalanches, while teasing skiers who couldn’t access some of Europe’s best slopes as resorts stayed shut down under COVID-19.

Skiing or not, whether we get snow or not still matters plenty; especially for natural ecosystems, for our water supplies, and for the various industries relying on it. Looking at snow behaviour – its extent, its depth, the time it takes to melt - is a constant winter sport for scientists across the world, be it hour by hour, or at decades’ level. But keeping track of snow is not always smooth.

Why should we care about snow?

“A few billion people rely on snow for drinking water; it’s role as a water reservoir is probably the most important aspect of snow,” says Dr. David Robinson, climatologist at Rutgers University. “Without snow, more energy is absorbed at the Earth’s surface, while snow cover reflects the sunlight back, cooling the environment. If snow melts earlier in the spring, warming might occur earlier which could translate into a warmer summer which could further dry the ground,” explains Dr. Robinson.

Snow is known for being a fussy weather element – what scientists would call “high natural variability”: it needs a temperature sweet spot to form, and year on year, snowfall amounts can vary widely.

But observations over the last decades show that snow is in shorter supply, while future predictions suggest Europe is bound to see less snow in the next 10-20 years. “We see a clear decrease in the long-term trend of snow,” says Dr. Kari Luojus, head of Satellite Services and Research group at Finnish Meteorological Institute. His team has recently published what is said to be the most accurate representation of snow conditions in the Northern Hemisphere since 1979. The data shows that while the amount of snow (or snow mass) has stayed rather the same in Eurasia and dropped across North America, both regions have seen a significant decrease in snow cover extent, especially in late spring, suggesting snow might be disappearing earlier and earlier.

“There’s been a general decline in snow cover extent,” Dr. Robinson confirms, “every decade since the ‘70s there has been less snow cover in the spring.” The climatologist who has been studying snow for at least 3 decades points out that snow is incredibly dependent on temperatures being close to the freezing point. Having -5 C, where you can get lots of snow versus +5 C, where snow becomes rain and melting starts, makes a huge difference, according to Dr. Robinson. The minus to plus transition is happening earlier in the year. “In spring we’re crossing that melting threshold earlier and once you’ve passed it, goodbye snow.”

The above stands for snow in flat areas across the Northern Hemisphere, but not for high altitudes. “You have a big difference in snow conditions as you go up in altitude, changing fast from centimeters to a few meters which you cannot catch well with satellite observations,” says Dr. Luojus, stressing that his team’s data applies only to non-mountainous regions. Since high-altitude areas have been sparsely populated, historical records of snow in the mountains rely just on observations from weather stations. But since snowmelt makes mountain ranges such as the Alps and the Himalayas key suppliers of freshwater for billions of people, accurately monitoring snow on the slopes becomes increasingly important for water security, but also for predicting floods.

Leveraging snow predictions on the slopes

Detailed measurements and predictions of snow conditions in the mountains are also the lifeline of snow tourism, which increasingly relies on data to manage more unpredictable conditions. Between 2014 and 2018, ski resorts in the Alps – which attract about 43 percent of skiers globally - have seen a below-average early season snowfall, according to data from a report on the ski industry. “Snow conditions should not be taken for granted, especially at low to middle altitude,” says Dr. Samuel Morin, snow and climate scientist at the National Center for Meteorological Research CNRM, in Grenoble, France. He explains that on the long-term, warming temperatures will hit the hardest there. “It’s very hard to say what is low elevation, because it depends on the local climate and other factors; in the Alps, it is around 1,500 m; that’s the critical height under which we expect the strongest changes to occur.”

The ski industry has been adapting for years, mainly by creating artificial snow. “The focus was to dampen the impacts of low-snow winters coming once in a while. Now snowmaking is a common routine of resorts and deployed as an adaptation to climate change,” Dr. Morin explains. For example, Austrian resorts alone have invested about €1billion in snow making since 2008.

But snowmaking itself depends heavily on snow and weather data. Dr. Morin says ProSnow, a project with Meteo France and partners across France, Austria, Germany, and Switzerland, can offer resorts a real-time way to manage their snow supply. It brings together resorts’ snow observations, data on how much artificial snow they produce, as well as weather data and seasonal forecasting to simulate how snow cover might change over time. “It can inform resorts’ decisions in optimising snow management over a few weeks,” Dr. Morin explains, by knowing whether they have enough snow, if they’re risking to overproduce, whether a warm event is coming, or if the wind and temperature conditions are fit for producing snow.

Dr. Morin has also worked with Copernicus’ Climate Change Service (C3S) on a climate service focusing on the long-term impact of climate change on ski resorts' snow conditions. Launched in August, the dataset looks at almost 40 variables, ranging from snowfall and snow depth to the amount of water it contains and the annual artificial snow production for all mountain regions across Europe. It also provides projections of snow evolution in different climate scenarios and compares past and future snow conditions across the continent. However, it does not give very localised data for ski conditions, so resorts need to combine this information with local data and knowledge.

Based on the dataset, this December C3S launched a new tool that would help the tourism industry look at past snow conditions, going all the way back to 1961, and comparing them with possible future snow conditions, up until the end of the century.

“This application gives tourism stakeholders in the public and private sector including ski resorts, cable managers over large areas a wide range of information they can use to understand the impact of snow conditions in the last decades, as well as simulate how future snow regimes might be like where they operate,” says Chiara Cagnazzo, sectoral information systems manager at C3S. “Ultimately, it is helping them to plan investments, and to strengthen their climate resilience.”

Snow monitoring is not just for tourism

Finland’s biggest hydropower company is tapping into the Finnish Meteorological Institute’s GlobSnow to adapt its operations to snow conditions, says Dr. Kari Luojus. But not all data is straightforward. “One challenge is that a lot of hydropower generation is happening in the Alps and more accurate information from the mountain regions is needed. If seasonal snow decreases, large regions will suffer from droughts. As we see a clear decreasing trend in spring snow cover extent, that will have implications on the timing of river run-offs and the availability of water,” Dr. Luojus explains.

Reversing the current trends in snow loss is difficult, especially early spring melt. “No one sees this thermal pattern reversing itself,” says Dr. Robinson, “the best we can hope for is to reduce the warming and keep temperatures in the winter as close to freezing as possible, so we can hang on to the snow.” Dr. Morin agrees: “At least at low elevation, there will be more and more rain and less snow. By 2050, snow might decrease by 10 to 40 percent compared to early 2000. For the second half of the century, if we go carbon neutral, climate change might stabilise somehow, and with it, snow conditions to the levels reached by then.”

As for winter sports, Dr. Morin thinks the slopes can still manage for the next couple of decades, especially if we look at climate change projections accounting for artificial snowmaking. “Resorts use the information we derived from C3S to know to what extent short and long-term climate change will affect them and be strategic. Some will need to be maintained, others will have to diversify based on their tourism and climate strategies.” And it’s not just resorts who can use the data - “using snow information from C3S can help mountain tourism become more sustainable and offer opportunities to local communities to run economic activities in line with future climate conditions,” adds Chiara Cagnazzo.