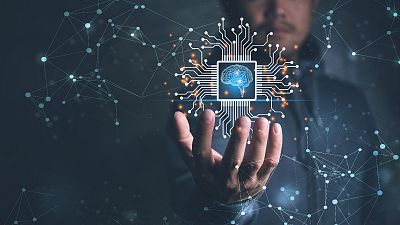 As more and more industries take on artificial intelligence to solve some of their biggest challenges, can machines help us understand and fix climate change issues?

So your phone recognises your face, and your bank can block any transaction unlike your spending habits. And your online supermarket nudges you with their vegan products just because you’ve bought that oat milk once, while your online movie platform keeps throwing B-movies at you after you watched that soap opera last month.

A growing number of our devices and services are relying on artificial intelligence (AI), a technology that continues to branch out and pop up in more and more areas of our lives. Scientists, entrepreneurs, and governments are leveraging AI to explore solutions for some of society’s biggest challenges. Untangling how the Earth’s climate behaves and how it might evolve in the future is high on the agenda. But while technology is helping us make more sense of the huge amount of data out there, how can its intelligence help us practically mitigate environmental changes and adapt to the future?

“When people say "AI" they often mean machine learning (ML), which is a set of algorithms that can learn from data,” says Dr. David Rolnick, assistant professor at the University of Pennsylvania. “AI is generally not going to do something better than a human, but it will generally be much faster, and it will be able to pick out patterns from really large amounts of data.” And it’s this ability to process very fast huge amounts of data, refine information, and find connections that have made AI a game-changer across industries.

This is no less true for climate science and monitoring climate change. Satellites are collecting climate-related data at unprecedented levels. Weather forecasting is done at revolutionary levels of detail. Climate models and scenarios still carry many uncertainties. Scientists are leveraging AI to manage this data-intensive terrain to refine climate science and produce more accurate predictions that allow society and nature to adapt to the future. “ML allows you to learn complex behaviour from data without physical understanding,” says Dr. Peter Dueben, research fellow at ECMWF. “The more data we have, the better the tools. As we have more and more data available, the machine learning tools will become better and better. This means that the tools will be more and more useful for domain scientists.”

“Using machines helps us measure and monitor the real world, which are key to making better decisions for an uncertain future”, according to Dr. Natalyia Tkachenko, Lead data scientist and AI at the University of Oxford. “AI in its truest form is not really about the data as such, but it is mostly concerned with finding patterns and connections in the complex world; the end game always remains decision, or processed information.”

In the Amundsen Sea, off the western coast of Antarctica, experts from the British Antarctic Survey (BAS) based at the Turing Institute are using ML tech to spot, track and follow how icebergs are breaking up into smaller, more narrower pieces, and train AI algorithms to predict future sea ice. In turn, AI allows them to interpret those predictions, and possibly gain new insights into how climate variables influence each other in space and time.

The pool of AI applications to solve environmental and societal issues, big or small, keeps expanding. The University of Washington is planning to use AI to track and better predict marine heatwaves; Tanzania’s Conservation Resource Centre will use AI in aerial surveys of wildlife and human activity to try and prevent animal-human conflicts. The city of Boston has tested GreenCityWatch’s software for an AI-based tree inventory that accurately checks the number and health of urban canopies to inform public policies.

Agriculture is also reaping AI’s benefits. Microsoft’s Azure cloud platform FarmBeats brings together data from sensors, cameras, tractors, and drones, and builds ML models based on combining datasets to monitor agriculture and increase farmers’ resilience to climate change. “Growers determine the timing for planting, watering, harvesting, and other practices based on weather,” says Ranveer Chandra, Chief Scientist, Microsoft Azure Global. “However, the available weather prediction is from the weather station, and not in the farm. One of our AI algorithms combines detailed weather models, and weather station data, with sensors on the farm, to give hyper-local predictions of weather in the farm. By filling in the gaps in data from the farm, the solution can predict values that improve farmers’ decisions.”

One ambitious mission for AI is creating a Digital Twin of the Earth, or a replica of the planet’s systems and processes. “It would be a numerical lab of the planet where we could experiment things so that we build policy and evaluate outcomes,” says Dr. Mathieu. “We already have the AI building blocks for developing Digital Twins of the natural environment, and ultimately a Digital Twin Earth,” says Dr. Scott Hosking, environmental data scientist at BAS. “We are unable to monitor every aspect of our changing planet at the level of detail required. By developing Digital Twins of natural environments, we can intelligently focus our sampling, which would be a game-changer over remote and hostile environments such as the polar regions where battery power and accessibility is challenging. This information could be used in real-time to instruct a fleet of drones and automated submarines where to go next to increase their effectiveness of future measurements.”

But AI is yet to be foolproof. In climate forecasting, there is not enough data to train algorithms, experts warn. “AI needs to be trained on historical data,” explains Dr Judah Cohen, seasonal forecasting director at Atmospheric and Environmental Research (AER) and climatologist at MIT. “We train on data going back to 1979 when satellites became of wide use, but this doesn’t provide enough historical cases to get optimal AI solutions. One way would be to create synthetic data with models, but whether model data is as good as historical data is an open question.”

Also, AI can’t replace climate physics, as Dr. Rolnick puts it. “There are limitations to AI,” adds ESA’s Dr. Mathieu. “ You can always find correlations between data, but that doesn’t necessarily mean there’s also a causal link there; so you need experts who can give explanations based on physics.”

Same goes for weather forecasting models, says ECMWF’s Dr. Dueben. “There have been claims that AI and ML can beat conventional tools for now-casting (weather forecasts going couple of hours into the future) and some multi-year predictions. However, it is very unlikely that ML will beat most of the other predictions and therefore "replace" weather forecast models as they will not be as accurate in most applications.”

Since a trained AI system works well only in the things it’s been trained in, other challenges also arise. “You have to make sure you are using it for the range of values it is trained on,” says Dr. Peuch. “Otherwise you can get spurious results.” This means that although an algorithm may make good sense of the data it was created to process, feeding it data outside its range of action might produce inaccurate results. But in climate research, it’s not just the data that changes, but also the climate itself. “When we speak of climate change, algorithms need to be very elaborate; because the climate continues to change; people need to be careful AI is not using just the past to predict the future,” adds the CAMS director.

The choice of algorithms is also a tough choice when it comes to climate change issues. “There are many AI techniques and choosing the optimal one for climate prediction off an a la carte AI menu is not trivial,” explains Dr. Cohen. “I think choosing and optimising an AI algorithm that can produce more than a slight improvement in current climate predictions will be a challenge.”

AI technology also raises questions around how we get a hold of and how we handle data. “There are not too many concerns about data privacy for conventional sources of weather observations,” says Dr. Dueben. “However, there is so-called "Internet-of-Things" (IoT) data that is hardly used for weather predictions today but may allow for significant improvements in the future. These are, for example, observations from mobile phones or other "crowd- sourced" data products. These would come along with data privacy issues.” Dr. Tkachenko goes further, arguing that if the raw data that goes into decision-making formulas is tampered with, it could produce negative outcomes. “So just as we list ingredients on our ready-made meal boxes, we may also want to know how the AI was designed and which data sources became part of it,” says Tkachenko.

In the end, can climate and environmental scientists learn from other industries’ use of AI? “Only use AI if there is an existing problem that needs it,” warns Dr. Rolnick. “It's easy to get distracted by flashy tech. In every application, it is essential to make sure that the AI is adding something. Applications of AI should be driven by their ultimate impact, and should be developed together with the stakeholders who will use and benefit from the technology. One big pitfall is imagining AI is going to magically solve problems. AI is powerful, but it is just one of many tools that can be used as part of climate change strategies.”