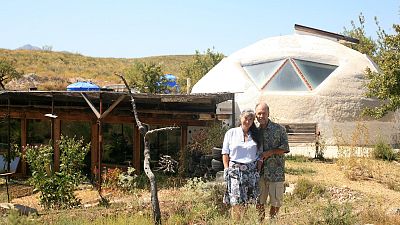 A British couple has built their own eco-home in southern Spain using materials that would normally end up in landfill.

Laura Davies and Dave Buchanan have spent seven years designing and building their home, which is based on an environmentally friendly structure called an ‘Earthship’.

The Earthship concept uses natural materials alongside upcycled rubbish to create an off-grid home and was invented by American architect Michael Reynolds.

“The main structural walls are built using old car tyres that are packed with earth. These form their own footings as they're so sturdy,” Davies explains. “To fill in the gaps between the tyres - and so make a flat wall - mud and empty drink cans are used.”

The drink cans are also used to make internal walls alongside bottle bricks. These are made from two glass containers, bottles, jam jars or whatever might be available, which are taped together. When they are included in the walls, they can be a beautiful decorative feature.

Although the building materials might seem unusual, Davies says, they are totally in line with the earthship’s eco-credentials.

It isn’t all trash though, locally sourced sustainable materials are also important. The roof is insulated with cork from a Forestry Stewardship Council forest in nearby Valencia Province.

Local inspiration runs throughout the project too. The couple built a unique dome which they use as a bedroom. “The geodesic dome was our addition to the earthship. It was an experiment in making a strong and relatively easy dome structure to emulate the Moorish architecture in this area.”

We'll find a use for most things to stop them going to landfill.

“The basic structure is wood. This we covered with cane, then papier-mâché. This was then packed out around the base with a thick layer or padobe (mud, cork chippings) to add insulation,” adds Davies.

“Towards the top we used purely the cork chippings stuffed into long sausage shaped sacks that I made from old curtains bought in charity shops. Lastly, a weather-proof layer of papercrete (papier-mâché and cement) was added.”

As well as the house itself, the couple also branched out and made a shed. “I could go on and tell you about the battery shed we made out of upcycled plastic tubs from a local factory, and the pallet shed made from old pallets. Or our gazebo made from reclaimed acroprops and planters from old bathtubs and sinks,” Davies jokes.

“But I think you get the gist that we'll find a use for most things to stop them going to landfill.”

Around their eco-home, the couple has slowly been creating a nature reserve to protect as much land as possible from industrial farming. This has recently become popular in the area and can have a devastating effect on local biodiversity.

“It now covers nearly 20 hectares surrounding the earthship and consists mainly of esparto grasslands and other Mediterranean wild plants,” Davies says. “Since we started it, and therefore stopped it being ploughed, the wildlife has blossomed.”

Varieties of wild plants have begun increasing, they have seen more and more birds and the nature reserve now boasts an impressive number of bee species. The bees, in particular, have provided inspiration for Davies who is also an artist.

One collection of her paintings depicts bees on upcycled teabags. These are being sold to raise money to buy more land to protect and rewild the surrounding landscape.

You can buy the prints from Laura Davies webshop here.