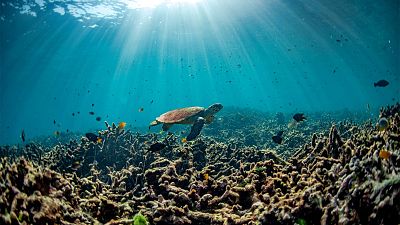 “Time is running out”, stressed Carolina Schmidt, Chile’s Environment and Climate Minister, in a video address before 2019’s Climate Conference COP25 last December. “There cannot be an effective global response to climate change without a global response on ocean issues,” she added. Ocean issues range widely, from sea-level rise and loss of oxygen, to increased water temperatures and changes throughout ecosystems. The Intergovernmental Panel for Climate Change’s (IPCC) special report on the state of the oceans features worrying future trends, while last year, the heat in the oceans saw the highest value ever recorded.

Ocean acidification is the phenomenon in which oceans are becoming more acidic, as they continue to absorb more and more of carbon in the atmosphere, which is increasing due to human-produced emissions. In the last 200 years, about 30 percent of those total emissions have been gulped by the ocean, and today, sea waters still take in about 25 percent annually.

Ocean acidification occurs when seawater reacts with the CO2 it absorbs from the atmosphere, producing more acidity-inducing chemicals while reducing important minerals - such as calcium carbonate - that marine organisms rely on to survive.

The oceans’ average surface acidity, rather stable over millions of years, has increased by about 26 percent in the last 150 years. “It was a very slow rise until the 1950s, but from then onwards, acidification gained speed,” says Dr. Jean-Pierre Gattuso, research director at the Laboratoire d'Océanographie de Villefranche, CNRS and the University of Sorbonne. “Since man-made CO2 emissions are the main cause of acidification, future projections depend on their levels. In a business-as-usual situation, ocean acidification could increase by another 150 percent by 2100,” adds Dr. Gattuso.

With 95 percent of the near-surface ocean affected by falling pH, acidification effects are increasingly felt globally, across a wide range of marine ecosystems. “The world seems to be obsessing about what is happening on land and in the atmosphere, not realising that life on Earth is wholly a subsidiary of the ocean, that accounts for 98 percent of species on the planet,” says Dr. Dan Laffoley, Marine Vice Chair on IUCN’s World Commission on Protected Areas and Senior Advisor Marine Science and Conservation for its Global Marine and Polar Programme. “What was predicted [about acidification] back in 2004 as something we needed not to worry about until 2050 or 2070 is happening now.”

Cutting the water’s amount of carbonate ions robs a wide range of marine animals of the vital material they need to build protective shells. Mussels, plankton, or reef corals are some of the main species under threat, multiple studies show.

Tropical coral reef ecosystems occupy less than 0.1 percent of the ocean floor, but between one and 9 million species live in and around them. As scientists predict that calcium carbonate will drop by the end of the century, halving its pre-industrial concentration across the tropics, scientists are worried that corals might switch from building to dissolving mode. While they might not shrink, ocean acidification alone might lower the density of their skeletons, by as much as 20 percent by 2100. Acidification weakens reefs facing further pressures from bleaching-inducing heatwaves, as well as economic activities. “We are weakening their repair mechanisms,” says Dr. Laffoley. In the next 20 years, scientists say that coral reefs are likely to degrade fast, challenging the livelihoods of 500 million people depending on them for food, coastal protection and income.

Acidification also affects deep-water corals – such as those in the North Atlantic – which are biodiversity hotspots, critical habitats for thousands of species, including commercial ones, such as shrimps, lobsters, crabs, groupers, and snappers. “Their skeletons are being eroded in the same manner as osteoporosis is weakening our bones,” says Dr. Laffoley.

A phenomenon not yet fully understood

“There are observations of how ocean acidification impacts certain species,” says Dr. Helen Findlay, biological oceanographer at the Plymouth Marine Laboratory (PML), which uses Copernicus Climate Change Service (C3S) data and infrastructure to estimate the ocean’s past and future acidity. These impacts are more often associated with ocean regions where deep waters – which naturally tend to be more acidic – rise to the surface, boosting acidification regionally, explains Dr. Findlay. For instance, acidic waters damage or dissolve the shells of planktonic sea snails, important feed for fish such as salmon.

But studies have shown species can respond in mixed ways. Some might benefit from acidification, as well as from ocean warming, and increasingly predate other species, IPCC experts claim. Across ecosystems, microscopic marine algae – or phytoplankton, the basic feed of many marine food webs – might suffer or flourish in more acidic seawater. Satellite data on ocean colour from the Copernicus Marine Service can provide a closer look at the ocean’s CO2 uptake and how the marine food chain might react.

“The Copernicus Climate Change (C3S) Marine, Coastal and Fisheries (MCF) Sectorial Information System (SIS) project has produced a series of marine environment climate impact indicators, including several relevant to ocean acidification, along with a number of tools that demonstrate how the indicators can be used in marine applications,” says Dr. James Clark, senior scientist at PML. “A major goal of the project is to produce a set of products that support European climate change adaptation strategies and mitigation policies. Indicators from the C3S-MCF project are being incorporated into the C3S Climate Data Store, and are expected to go live in the next few weeks.”

Effects of the same phenomenon may take different faces across regions. Through the mid-2000s, the U.S.’s Pacific Northwest began seeing dramatic oyster die-offs in hatcheries, as the larvae were affected by acidified waters; the vital coastal shellfish industry was hit hard. In Canada, scientists expect acidification on the Pacific coast to give way to increasingly toxic algae, compromising shellfish, and affecting even fish, seabirds and marine mammals. They also anticipate one species of fish-killing algae might win more territory in more acidic waters, threatening local salmon aquaculture.

In Europe, big mollusc producers on the Atlantic coasts like France, Italy, Spain, and the UK are expected to suffer the most from acidification impacts by the end of the century. Data from the Copernicus Marine Service, which recently included seawater pH among its ocean monitoring indicators, is used by researchers to gain a better understanding of how acidification evolves in European waters.

Acidification effects in the Arctic also worry scientists, some predicting that its waters will lose its shell-building chemicals by the 2080s. Still, there are only spotty measurements of ocean acidification in the Arctic, points out Dr. Gattuso, due to its harsh research conditions. “What we do know is that Arctic waters are naturally more acidic – as CO2, like all gases, dissolves much faster in cold water. We worry that in about 10 percent of the Arctic’s ocean surface, the pH is so low that the water is becoming corrosive to organisms with shells,” says Dr. Gattuso.

“The problem is we are really asking for trouble by changing the functionality of the ocean,” says Dr. Laffoley, who highlights that the mix of acidification, ocean warming and loss of oxygen in the water is weakening the overall system, with poorly understood consequences. “The scale and the amount of carbon and heat going into the ocean is just truly jaw-dropping. It’s a problem that we are rather storing up than resolving it.”

“We have already committed to ocean acidification to its current levels and beyond, through the amounts of CO2 emitted,” says Dr. Findlay. “The only certain approach is mitigating CO2 emissions,” says Dr. Gattuso. “It will take a long time to go back to the preindustrial state, but we can stop ocean acidification.”

Science is exploring solutions, but their effects on ecosystems and ocean processes are not yet fully understood. Some ocean-based climate change fixes don’t target directly ocean acidification, while others might not be very efficient at locking away the carbon. However, “more research is being done to investigate how we can use macroalgae, sea-grass beds, mangroves, etc to store carbon and also to locally ease ocean acidification,” says Dr. Findlay.

Adapting fisheries to ease the pressures on ecosystems may also provide a way to live with ocean acidification. For example, C3S and PML are combining what models say about potential effects of climate change on European seas with species information to foresee how fish stocks might change and how industries and people depending on fisheries need to adapt. “The C3S data will be used to identify areas of opportunity, such as increases in numbers of some fish species, as well as risks, such as declining fish stocks,” says Dr. Clark. “As a result, the sector will be able to mitigate the effects of climate change by planning sustainable fishing practices.”

Identifying which parts of the ocean need urgent conservation could also help ecosystems mitigate acidification. Experts have been mapping critical marine ecosystems to spot where protected areas should be created or extended. “We can have places where we take that pressure off, so we give areas of the oceans the best hope of riding out the challenges that they face while we go about reducing CO2 emissions,” says Dr. Laffoley.

Closing holes in the net: How the EU needs to remove secrecy from European fishing ǀ View