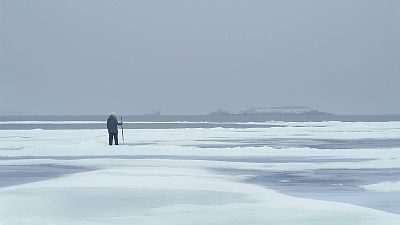 It’s usually in September that sea ice in the Arctic gets to its minimum cover. But last month’s levels were again unusually low, data from EU’s Copernicus Climate Service (C3S) shows. Ice covered 36 percent less of the Arctic’s seas compared to its September average between 1981 and 2010.

Sea ice has fallen to record minimums in 2012 and 2007, declining by an average of 13.4 percent per decade between 1979 and 2015 (source: Intergovernmental Panel on Climate Change (IPCC). Recently, its levels have fallen below average even in late winter, usually its peak season, data from Copernicus shows.

The Arctic has been warming twice as fast as the rest of the planet, with higher temperatures pushing sea ice into a loop of melting and thinning. Its extent is lower today than in the ‘80s and ‘90s in “every area, every month and every season”, according to a recent IPCC report, which points out the plunging sea ice levels of September are probably unseen in at least 1,000 years. The same report points out that the Arctic’s sea ice melt season has grown as ice melts earlier and waters freeze later in the year. “We'll have winter sea ice for a long time to come, but unless actions are quickly taken, the summer sea ice might be essentially gone only a few decades from now,” says Dr. Mark Serreze, director of the National Snow and Ice Data Center (NSIDC).

In 2018, Copernicus reported the first time in four decades that sea ice north of Greenland opened unexpectedly in the winter, as warm air came into the Arctic. Accurate predictions and monitoring of sea ice evolution in the Arctic remain key in understanding climate change. C3S has been improving its predictions using modelling systems that put together real-time ocean, sea and ice information taken, and looks at historical data from 1979 onwards. Daily data on sea ice concentration, extension, type and thickness is essential for researchers studying interactions between sea and atmosphere, as well as sea ice influence on marine ecosystems and shipping.

White surfaces are much better at reflecting sunlight than darker ones; summer sea ice reflects about half of the solar radiation it gets; only 10 percent bounces off open waters, so an Arctic with less sea ice in the summer absorbs more heat than usual - the sea ice albedo effect, one of the main drivers of “Arctic amplification”, according to Copernicus. “It's part of a feedback - while we're losing the sea ice cover because it's warming, the loss of the sea ice cover makes it even warmer,” Serreze says. “Essentially, the Arctic acts as a refrigerator to help cool the planet and we're losing that refrigerator effect. Loss of the sea ice cover is accelerating global warming.”

Melting sea ice could also unlock dangerous GHG methane trapped beneath the Arctic permafrost, on the shallow continental shelf. Previously, sea ice would cover Arctic shores even in the summer, keeping it below freezing temperature, Prof. Peter Wadhams, professor of ocean physics at the University of Cambridge, explains. But in the last decade, as the sea ice retreated and waters got warmer, they extended to the seabed and started thawing offshore permafrost. The underlying methane could then vent into the atmosphere. Projections show that if just 8 percent of the trapped gas would escape, about 50 GT, global temperatures would rise by 0.6 C, says Wadhams. “This is a very serious threat facing mankind.”

Thinning sea ice also changes the amount of light getting into the water, with impacts on the biological processes of marine life, including phytoplankton and fish. “We believe interactions across the food chain will change profoundly with less ice,” says Dr. Barbara Niehoff, deputy head of the Polar Biological Oceanography section at the Alfred Wegener Institute, “from top-predators and their prey down to primary producers (phytoplankton) to secondary producers (herbivorous zooplankton).”

Sea ice also stores and carries tiny particles of plastics, most often in much higher concentrations than in liquid sea water; its melting indicates the release of plastics in the ocean might accelerate, according to Chelsea Rochman, assistant professor in the biology department at the University of Toronto. Ice samples from five Arctic ocean regions contained up to 12,000 microplastic particles per liter of ice, a recent study showed. As the water flows from the Northern Atlantic and European Seas into the Arctic, more and more plastic waste might finds its way into the region in a matter of years, according to Dr Jason Holt, head of Marine Systems Modelling at the National Oceanography Centre.

The prospect of a mid-century Arctic without summer sea ice makes it an appealing shortcut for ships on a Europe to Asia route and opens more of its ground for resource exploration. But an ice-poor Arctic might destabilize fragile polar ecosystems and echo far into the world’s climate, scientists warn.

Through ice free Arctic waters, ships can cut about 10 to 15 days out of the current 48 days journey from Europe to East Asia. Shipping activity has already increased in the last two decades, in parallel with sea ice melting, the IPCC report states. Sailing through winter ice might also become smoother, as frozen waters have been thinning – since 1979, about 90 percent of sea ice surface older than 5 years has disappeared – which means ice becomes easily breakable.

Increased traffic through pristine Arctic ecosystems raises concerns regarding environmental exposure to oil spills and air pollution. The biggest threat from ships is heavy fuel oil (HFO), according to the Arctic Council, a multi-government forum for Arctic states. Burning the sulphur-rich residual oil favoured by big ships spits out high amounts of harmful substances, including global warming CO2, nitrous oxide and black carbon, the second most potent heat-trapping gas. Its high density also makes it extremely difficult to clean up in case of a spillage. In 2015, about 57 percent of the fuel ships used in the Arctic was HFO.

Emissions from ships include black carbon (BC), left behind by incomplete fuel burning; BC absorbs more radiation both when it’s in the atmosphere and as it lands on snow and ice. Research has shown that black carbon in the Arctic can be five times as warming than at middle latitudes. Compared to 2015, estimates say BC emissions might rise by 6.5 percent in 2025, but even a small diversion of large cargo ships from Panama and Suez Canals to the Arctic might boost BC emissions by 46 percent. Some shipping companies, including the world’s third container line company are already announcing they will not use the Northern Sea Route for environmental concerns.

Opening new sea routes also threatens wildlife habitats, although the extent of potential damage remains uncertain. A 2018 study on seven endemic Arctic marine mammals species showed more than half of 80 animal populations were vulnerable to shipping routes; narwhals, a type of whale that doesn’t like moving out of a limited habitat, were most sensitive, along with belugas and walruses. Areas of more intense traffic, such as the Bering Sea or the eastern Canadian Arctic, were three times more vulnerable to impacts from ships than more remote areas. Experts claim there might not be enough space for wildlife and ships to co-exist without clashing in the Arctic, even with sea ice melting. “Changes in the timing, distribution and thickness of sea ice and snow have been linked to changes in distribution, denning, foraging behaviour and survival of polar bears, the IPCC shows,” says Melanie Lancaster, senior specialist Arctic Species at WWF Arctic Programme. “Better standards and practices are needed for Arctic shipping.”

“Short-term Arctic predictions of weather and sea-ice conditions can help to make the growing human activities in the region safer, so that human as well as environmental disasters can hopefully be prevented,” says Dr. Helge Goessling, Head of Sea Ice Prediction at the Alfred Wegener Institut. “Operational forecast centres like ECMWF are moving from classical „atmosphere-only“ models to seamless systems that also provide dynamical forecasts of ice conditions on up-to-seasonal timescales, and they have proven to be useful up to a month in advance, but we need to push that limit further.”

C3S is developing a Global Shipping Service, to provide concrete estimates of the impact of climate on shipping routes across the globe, including the Arctic one. “This is the first service that allows the industry to see how the climate will affect shipping routes,” says Carlo Buontempo, director of C3S. “Several companies have already expressed their interest in using the service when it will be up and running.” They will receive high quality seasonal information on key climate and ocean factors affecting sea routes, while customised models will estimate the cost of specific voyages.

C3S global shipping will also provide projections on the cost and availability of shipping routes within the next 10 to 100 years, but, adds Carlo Buontempo, “the opening of the Arctic route also opens new ethical dilemmas about the exploitation of the Arctic given that increasing shipping volumes could lead to higher emissions and greater risks of environmental damages in a region which is still relatively pristine.”

“The Arctic needs the rest of the world to step up and meet their commitments to reduce greenhouse gas emissions under the Paris Accord,” says Lancaster. “A lack of financial resources, human capital, organizational capacity and knowledge is making it difficult for Arctic communities to adapt to these rapid changes in the environment. Arctic states must work with communities to help them adapt, particularly along the coasts and in areas on permafrost.”

“We've long known that as climate change took hold, some of the biggest changes would be in the Arctic,” says Serreze. “We hate to say that we told you so, but we told you so.”