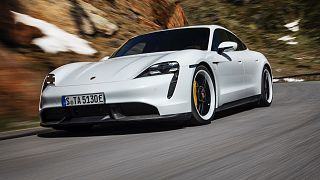 Porsche has finally revealed the production version of its first electric car, the Taycan.

Debuting in flagship Turbo and Turbo S variants, the Taycan is a four-door, five-seat electric saloon providing storage in both the front and back. Porche’s inaugural electric vehicle is powered by an electric motor on each axle, drawing energy from a 93.4kWh battery pack located in the floor.

With all optional extras selected, the Taycan will be priced just above the Tesla Model S at around £150,000. Cheaper, less powerful versions of the Taycan will be announced at a later date, along with a production version of Porsche’s CrossTurismo concept, which will add a taller, chunkier body to the same platform.

Porsche claims that the Taycan Turbo S has a total power output of 560kW, which equates to around 750 horsepower. These figures are offered for up to 2.5 seconds via an over-boost feature, whereas the normal power output is a still-huge 460kW or 616HP.

Despite serving up such huge performance, the car is almost completely silent as standard, with just an occasional electrical whine coming from the motors. However, an optional extra called Porsche Electric Sport Sound adds an artificial engine noise played through the car’s sound system which is reminiscent of something you would find in a sci-fi film. Like with the Jaguar I-Pace’s generated engine sound, this doesn’t aim to mimic the sounds of a petrol engine but instead helps to add a sense of drama to sportier driving.

Read More | Next generation of electric cars heading to Europe

The Taycan's range and re-charging

Porsche says the Taycan Turbo S has a range of between 387 and 453km using the Worldwide Harmonised Light Vehicle Test Procedure, while the Taycan Turbo manages 389 to 420km, thanks to its slightly smaller wheels.

Re-charge times are equally impressive, with Porsche claiming the battery can be filled from 5% to 80% in as little as 22.5 minutes. The company also states a charge time of 100km every 4-5 minutes using the fastest public chargers currently available.

Porsche says these figures will increase dramatically in the coming years. The Taycan’s innovative and unique 800-volt architecture means a maximum charge rate of 270kW at launch, but this could increase to 400 or even 500kW in the future, as charger technology improves. Porsche believes this will give them an edge over competitors who could struggle to get their charge rates above 250kW.

Although Porsche doesn’t have its own branded charging network to rival others like Tesla’s Superchargers, it has instead created the Porsche Charging Service or PCS. This gives Taycan drivers access to tens of thousands of chargers across Europe and the US, regardless of which company operates them. The locations of these partnered chargers can be viewed using the car’s navigation system and a companion smartphone app with payment taken automatically from the driver’s credit card.

Inside, the Taycan has a cabin featuring up to five digital displays. One, which is curved, 16.8 inches wide and made from glass, fits behind the steering wheel and has touch-sensitive buttons with haptic feedback, a feature which issues a clicking sensation to your fingers when pressed. These buttons provide control of the lights, suspension, traction control among other systems.

A second, 10.9-inch display sits in the centre of the dashboard and takes care of much of the car’s infotainment system. This includes media playback, vehicle settings, phone and navigation. A third touch screen sits below this, allowing passengers to control the car’s climate.

A fourth optional touchscreen sits in front of the front passenger and gives them additional access to the car’s infotainment system so that they can adjust music without distracting the driver. Finally, the fifth touchscreen sits between the front seats and is for rear-seat passengers to adjust their climate and the car’s ambient lighting system.

Apple CarPlay is offered, but Android Auto is not, as Porsche says 85% of its buyers use iPhones. In a nod to current trends, the Taycan is offered with a completely leather-free interior for those that wish to avoid animal products.

Although a heads-up display won’t be present in the Taycan at launch, Porsche says it is working to add one at a later date.

Despite the Taycan offering supercar performance, the car is intended to be practical too. It manages to blend the driving position of a Porsche 911 (and the lowest centre of gravity of any Porsche currently on sale) with seating for four adults and space for six carry-on suitcases in the rear trunk.

The Taycan Turbo and Turbo S are available to order from Porsche right now, with deliveries starting in early 2020. The Turbo is priced from £115,858 and the Turbo S starts at £138,826.