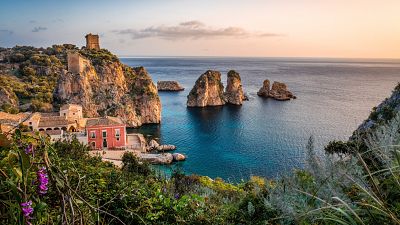 Film stars, celebrities, politicians and even royalty graced the Sicilian coast with their presence this week, for the 7th annual ‘Google Camp’, reports Fox Business. The enigmatic conference is known for its exclusivity, with billionaire CEOs jet-setting in to take part in the proceedings, with the goal of working together to effect some sort of change on a global scale. Each year, the theme is different, with previous editions centring around issues like feminism and the role of sports in modern culture. But this year, all eyes were on the environment, with the theme of climate change at the forefront of the event.

Every year, staff at the Sicilian haven at Rocco Forte Hotels sign non-disclosure agreements so that no information can be leaked about the goings-on at the annual event, rumoured to cost Google around $20 million. As such, we cannot predict the exact discussion topics of the conference, but Forbes speculates that it will all centre around the impact of global warming this year, especially given the profiles of many of the guests.

Leonardo DiCaprio has his own climate change foundation (The Leonardo DiCaprio Foundation) and is even said to be opening an eco-resort in Belize in the near future, while Barack Obama has also spoken openly about the threat of environmental concerns. Reportedly, guests pay for their own travel to Sicily, but Google pays for everything at the resort, where rooms would normally start at $900 dollars a night.

Below is an exclusive insight into the event, posted by Forbes writer Jim Dobson, whose own piece details the secrets of the 'billionaire summer camp':

Billionaire Summer Camp: The Rich And Famous Flock To Sicily For The Top Secret Google Retreat. Chris Martin performs at the ruins for VIPS including @Harry_Styles and @katyperry, via @Forbeshttps://t.co/knrsqZWlpwpic.twitter.com/sfvoh16tbG

Given the eco theme of the conference this year, it surely begs the question, shouldn’t a different approach have been applied to travelling to and from the resort, given the pressing environmental issues at hand?

In reality, 114 private jets flew into the Italian Verdura Resort, according to the Italian press, and many of the elite guest list arrived in multi-million pound yachts.

With stars like Leonardo DiCaprio, Barack Obama and Prince Harry in attendance, reports Jim Dobson at Forbes, they were hardly going to be hitch-hiking, but even so, the luxurious vehicles seemed not in-keeping with the subject of the conference this year.

So is it hypocritical?

A flight from New York to Palermo, Sicily, generates around 4.24 metric tons of CO2

Inevitably, celebrities like Katy Perry, Harry Styles, Bradley Cooper and eco-fashion designer Stella McCartney, are thought to have arrived at the retreat in style, according to the same source at Forbes. American Businessman Barry Diller, creator of Fox Broadcasting, allegedly rocked up on his $200 million yacht Eos, including both sails and two 2,300-horsepower diesel engines.

The list goes on, billionaire Dreamworks founder David Geffen is also thought to have hosted Katy Perry and Orlando Bloom on his $500 million yacht, Rising Sun, shown here on his Instagram account.

Therefore, you could certainly argue that this is an immense hypocrisy. According to our calculations using the flight carbon footprint calculator, a flight from New York to Palermo, Sicily, generates around 4.24 metric tons of CO2. This is the equivalent of 540,652 smart phones being charged at one time, based on measurements carried out by the Greenhouse Gas Equivalencies Calculator at the US Environmental Protection Agency.

And it’s not as if the plane is carrying hundreds of people, like any other would, these celebs arrive in private jets. All that CO2, for just a few people crossing the Atlantic – it isn't exactly eco-friendly is it? What's more, the European Commission predicts that by 2020, global international aviation emissions will be around 70% higher than in 2005, sparking a movement called plane-shaming.

But, with them all in one place, perhaps working together to achieve a common goal is worth it?

While the facts remain, following the influx of private vehicles to Google’s Italian retreat, there is an argument to be made that both the coverage generated (at least 20 articles by major outlets such as The Times, The Daily Mail, The Telegraph and The Independent) and the environmental awareness resulting from it, makes it all worth it.

To centre such an important event around climate change in this day and age is a positive step in the right direction. Particularly given the amount of influential figures in attendance, all with staggering platforms to effect change all around the world.

To have them all in one place, working together to achieve a common goal that could really make a difference along the road to becoming carbon neutral before 2050 - perhaps the positives outweigh the negatives. And even if you disagree, at least the very fact they all arrived in such sheer extravagance has brought all the more attention to the event and the eco themes surrounding it.

It seems this isn't the first time a 'room full of billionaires' have been called out for plane-shaming, as only earlier this year Historian Rutger Bregman made a speech on the topic. The event was the renowned World Economic Forum 2019 in Davos, a similar conference involving a meeting of minds from all over the world, from business to politics.

From planting trees to contributing to clean energy research schemes, there’s plenty of options to choose from to neutralise flight emissions when going on holiday.