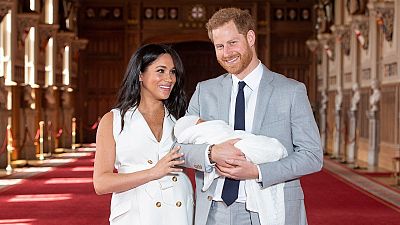 On Monday morning, we received the joyous announcement that Meghan Markle, the Duchess of Sussex, welcomed a healthy little boy into the world, Archie Harrison Mountbatten Windsor.

The Kensington Palace Instagram account released the news early in the day, reporting that the Royal Highnesses’ son, Archie, weighs 7lbs. 3oz. Prince Harry glowed with pride, praising his wife in the words, “It’s been the most amazing experience I could ever possibly imagine. How any woman does what they do is beyond comprehension.”

Is Meghan Markle a vegan?

Meghan is a known advocate of sustainable living, supposedly sticking to a plant-based diet during the week, but not exclusively. Back when she was a full-time actress, she told magazine Best Health: “When I’m filming, I’m conscious of what I eat. I try to eat vegan during the week and then have a little bit more flexibility with what I dig into on the weekends.”

The Duchess has also turned heads with her ethical wardrobe, often choosing to appear publicly in sustainable brands such as **'**Reformation' and French shoe brand 'Veja', who produce environmentally-friendly trainers. And to top it off, Meghan also supports adopting animals as opposed to buying them, proudly using the #AdoptDontShop hashtag on her social media pages. Clearly, she is environmentally conscious and cares greatly about animal welfare. She has two dogs called Guy and Bogart.

Will baby Archie be raised a vegan?

According to an unknown insider from Buckingham Palace, Meghan could seriously be considering breaking with tradition and raising her little boy vegan. The source told Woman’s Day that the decision is creating tension between the royal couple and the Queen, who, at 92, is supposedly outraged at Meghan’s insistence on modernising royal conventions.

Plant-based eating is a global trend that is growing exponentially as everyday people discover the immense health benefits, reduced environmental impact and ways in which they can help prevent animals being exploited – according to The Vegan society.

But what would raising a vegan baby actually look like? Here’s what The Vegan Society would advise:

- Breast milk or infant formula should be a major part of your child’s nutrition until at least age one.

- Nutrients are crucial, particularly Vitamin D, B12 and iron supplements to help your baby’s strength and development.

- Foods would have to be rich in iron. Solid foods would include ground nuts and seeds, avocado, green vegetables, whole grains, beans, peas, sweet potatoes and calcium-fortified tofu served as finger food, and healthy fats and oils with meals and snacks.

Meghan’s decision might be radical in the royal sphere, but it’s becoming more and more common all over the world as we learn more about a vegan diet. The royal couple are not stopping there either, using vegan paint to decorate Archie's nursery in their home of Frogmore Cottage, whilst also choosing a gender-neutral colour palette of white and grey.

How is the public reacting?

Reactions to this speculative news have been mixed on social media, but most people are supporting the royal couple's decision. One writing humourously on twitter, "The baby that saved the royal family and propelled them into a new, modern, vegan, gender neutral, organic avocado, bananarama era!"

Enthusiastic voices could be heard from all over Europe following the potential news, such as this French twitter user, writing "le royal baby est un vegan baby yeeessssssss."

But as is always the case with controversial topics, some people were not so keen on the idea, writing, "Where's the beef? Well, it won't be in Baby Sussex's diet if Meghan has her way and raises him/her vegan. Poor little royal. It will be life in a fish bowl and not even any bangers and mash for comfort food."