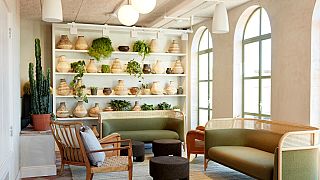 “Intense” is the best word to describe Paul van Zyl, co-founder of The Conduit, literally the most talked-about private members club to open in London in recent years because of its unorthodox mission and high-powered membership.

Rather than trading on affability or charm, Van Zyl’s stock in trade is facts and figures. He talks like a messianic policy wonk about climate change, refugees, population growth and economic polarisation, adducing statistics with dizzying fluency.

By way of explaining the club’s mission, he observes: “Instead of viewing these trends as inevitable historical forces which will run us over like a freight train, we can stand up and and push that train back down the track of history. You can take agency back in your life by looking at these trends and asking, what can I personally do? How can I mitigate the scourge of climate change? How can I create a decent and just society? What are the ways that I can offset jobless growth? What can I set up? How can I finance it?”

Thought leadership and entrepreneurship are the lifeblood of The Conduit. “The new heroes of the world are entrepreneurs. They’re the people who are initiating and innovating. They see problems as opportunities waiting for solutions. They’re not waiting for someone to give them permission. At the most macro level, that’s what this place is trying to do. We want to encourage, inspire and support people who are passionate about positive social change in an entrepreneurial way,” explains Van Zyl.

The below-40 membership of the World Economic Forum

Van Zyl was invited to become a YGL after he co-founded the International Center for Transitional Justice, the non-profit assisting governments and their victims to pursue accountability for mass atrocities and human rights violations. At YGL events, Van Zyl witnessed first-hand what could be achieved when a hand-picked group of brilliant, can-do individuals are encouraged to brainstorm and work together. This experience spurred his desire to create a place where change makers could meet and knock around ideas 365 days a year.

To spark ideas and galvanize collaboration, the club’s programming is based on the UN’s Sustainable Development Goals and reads like the line-up of Intelligence Squared. The content rubrics of the club’s programming are Education and Skills, Climate Change and Sustainability, Employment and Economic Opportunity, Health and Nutrition, Gender Empowerment, Justice and Equality and Art and Culture. Upcoming events include “Kurdistan: In the Shadow of History”, “China’s Vision for Climate Action” and “The New Generation of Design.”

The club’s programming has hit a deep chord and sparked insatiable demand among members. Events are typically sold out within 24 hours of being published and usually result in a waiting list of 50-100 people. In response, the club intends to double its calendar and add 100 more talks. What’s more, the club has plans to record and publish its content so that “it’s not just for the 3000 people within these four walls,” Van Zyl says. A podcast is also in the works.

With entrepreneurship at the center of The Conduit’s mission, the club is literally putting its money where its mouth is and in the early stages of establishing its own impact fund. Co-founder Nick Hamilton is a former banker and chairs the club’s Finance Committee while co-founder Rowan Finnegan previously established an impact fund in the U.S. focused on sustainability. (In addition, Finnegan is responsible for the sustainability of the club’s fit-out and construction.) The club’s second floor is also a workspace and office for one hundred entrepreneurs.

This entrepreneurs-in-residence program developed organically after the club launched. “We first started doing it with a few people and it kept on mushrooming, so we were like, Holy Macaroni! It’s too valuable not to have this group of people here because look at the synergies of having them under one roof. So, we officialized it,” explains Van Zyl.

In the same vein, the Club’s impact partners provide content and support for entrepreneurship. One such impact partner is Chivas. In March, it hosted a three-day accelerator programme in the club for the top twenty global finalists of its Chivas Venture 2019 competition. The event gave finalists the opportunity for coaching and engagement with club members so they could take their businesses to the next level. Similarly, the club has established a mentoring program for MBA students of LSE.

On the night that I visited the club, there was a panel discussion about cyber-intelligence, with commentators and experts from the media, government and non-profit sectors. I made it a point to mingle with some of the guests in order to get a flavour for the club’s membership. Among others, I met a “planet tracker” from a non-profit advising corporations on the potential commercial impact of ecological devastation on their businesses and the founder of the UK’s leading reuse platform.

Ideas alone however can’t make change. Changemaking requires ideas plus capital. Therefore, The Conduit’s membership is equal parts entrepreneurs and investors. While startup founders possess undeniable sex appeal, Van Zyl is quick to point out that investors aren’t just fat cats writing checks. “Let’s face it,” he says, “it can be soul-destroying to be aimlessly rich. The kind of people who join the club are soulful. They want to do things.They want to deploy their capital. If you build your community around stated goals such as positive social change, whether you are an investor with disposal capital or an entrepreneur who is seeking that capital, you are united by your curiosity in the world. Great investors are the best asset ever -- because they don’t just give capital but advice, strategy, support and connections.”

The club is undeniably chic and impeccable in its aesthetics, cuisine and atmosphere. (That comes as no surprise since there’s a Michelin-starred chef in the kitchen and Van Zyl founded what’s widely considered to be the world’s most luxurious and chic eco-fashion brand, Maiyet.) Paradoxically though, it is eschewing the glamour and PR fluff usually associated with private members’ clubs that has made The Conduit the sexiest, freshest club in town. Precisely because the agenda and membership criteria are hard-hitting and rigorous, the club has created a category of its own -- and, based on what it’s accomplished in the short half-year since its launch -- it certainly looks set to own it.