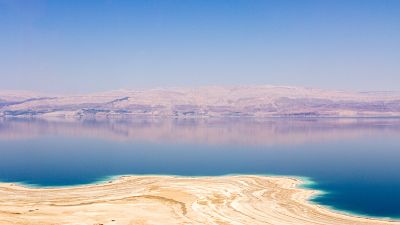 Walking along the shore of the Dead Sea gives you a clear vision of how quickly nature reacts to human intervention. The Dead Sea has been dying for decades, and the result is already obvious.

Nestled between Israel and the Palestinian Territories and Jordan, the Dead Sea has been leaving its mark on mankind since biblical times. Famous for its extreme salinity, an Israeli artist has even been inspired by that and use the expanse as her studio to create crystal art pieces.

Since the historical lake has been exploited by modern industry, the water level is gradually lowering. The mineral extraction and the diversion of the River Jordan’s water have been big contributors to the phenomenon.

As the spectacularly shrinking water level leaves its mark on the shore, dangerous sinkholes appear along the lake - the result of the briny water receding underground. In 1990 there were a little over 100 sinkholes, according to the Geological Survey of Israel. Today there are more than 6,000. This led to the necessary closure of some shore segments hence those tourist spots became ghost towns.

Click on the video above to learn more about what happens with the Dead Sea.