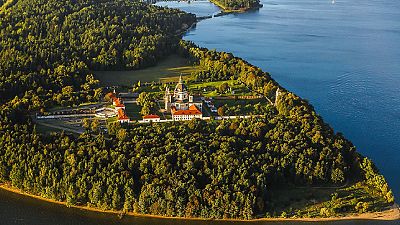 You want to start a piece like this with the sun rising, but instead it was lashing down with squall, the clouds like bubbles taking up all the space in the sky – and out on the confluence of the Neman and Neris Rivers, each as muddy as each other, a buoy bobbed with a flashing light on top peeping out a strange signal.

This was a part of the Kaunas Biennial, an art happening that is rapidly gaining notoriety around Europe, not least for connecting artists from the East and the West. Those metaphorical connections became literal. This buoy was transmitting something – if you logged on to a website on your phone you could read the story the artist had programmed to be told in Morse code. Dots and dashes are so simple yet so effective at pushing a point.

Kaunas is communicating with the outside world too – it's tapping out 'C-o-m-e a-n-d v-i-s-i-t' and there are many good reasons to. Not least because, yes, it is a border between East and West and it always has been. For a while this very river delineated the line between German and Russian influence, the two most powerful and destructive influences in this part of the world. But when Lithuania found some space to push against those two big bulwarks, it was in Kaunas – not current capital Vilnius – that the country and its culture found freedom of expression.

At the highpoint of Kaunas in the 1930s, a frenzy of building took place and left the city with an exquisite collection of Art Deco architecture which they're trying to spruce up and get UNESCO World Heritage Listing for. The Post Office and the Milk Company HQ are buildings that scholars would travel for a long time to see. There are also fantastic runs of inventive art deco houses and apartment blocks taking up whole streets. It's a joyous sight on grey Baltic mornings.

Coffee and a strange but comforting dish of baked cheese await me at Kultura, the cool cafe inside the Modern Art Gallery where hipsters gather speaking English beneath retro art posters and a Russian ice hockey arcade machine. And on the wall of the brutalist building the gallery lives in is a mural by Os Gemeos, those bad Brazilian bros of the street art world, whose mother was from Lithuania. There are many murals around the city and the gallery will give you a guide to them if you ask nicely.

Something older awaits on the outskirts, past a huge unnatural reservoir where the Neman was dammed without its consent. The Pazaislis Monastery is a weird Neo-Baroque confection housing some haunting history and a part of it has been taken over by the luxury Monte Pacis Hotel where I lunch on baked potato and rabbit and a royal flush of decadent desserts including one which is a kind of deconstructed chocolate bar.

That nascent nationalism of the turn of the 1900s was stoked in no small part by MK Ciurlionis, composer and artist. And at the museum dedicated to his work I look at paintings that brood and show something of the recalcitrant Slavic spirit and the gloom of the Baltics and which express at the same time the pain and the joy that comes from being human. They could have only been painted in cold climes. The attendant puts on some of his music and it strikes me that it expresses something profound about simply being human, simply living – as well as a more subtle call to arms for the Lithuanians. It is all fascinating.

At night it would be rude not to pay a visit to the Hanseatic Old Town, with its Teutonic Castle and handsome main square. The bars are alive and the beers are cheap and in the street couples are doing the Tango while a crowd Snapchats it all on their phones. The atmosphere is merry. At Hop Doc (which feels like it could be in Hoxton) a beautiful barmaid who speaks perfect English tells me about the craft brews from round these parts and I try a couple and then one of their signature burgers.

It powers me up for the walk back to my hotel, Hof a sweet little boutique bolthole squatting in an alley where you can watch locals do the shopping as you sit out on the terrace. A surprising city with a varied history, and a place where things are not as they seem, Kaunas has made an impression on me.