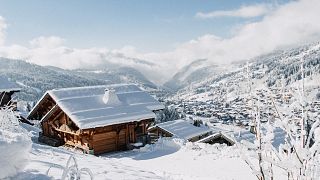 "To wish someone "break a leg" has a whole different meaning here," says British comedian Tom Houghton as he joins me for a ski around the French resort of Les Gets in the Portes du Soleil.

Tom, aka "The Honourable," is the headline act at the new Montreux Comedy Goes Skiing festival, featuring two French and two English stand-up evenings at the Colombiere hall. And he definitely doesn't want to break anything right now.

Despite the poor weather earlier in the week with some much-needed heavy snow and low visibility, Tom says the Brits were still out on the slopes:

"It showed how much Brits are prepared to force themselves to have fun," he says. There were no French out skiing, but the Brits just insist "there’s nothing like it"".

Tom has also observed a few differences in the two nations' sense of humour. His French counterpart, Gérémy Crédeville opened the French shows earlier in the week, by stripping off to Joe Cocker's "You Can Leave Your Hat On".

"You won't get me doing that," says Tom.

He was also surprised to see there wasn't an interval. "That's changed for the Brits," he says. "They will need to get a drink."

The English show is also longer; "it’s nice to be in some event where we finally last longer than the French" he quips.

The event is a co-production with the Montreux Comedy Festival, the largest French-speaking comedy festival in the world which has attracted French and international comedians to the shores of Lake Geneva every December since 1989.

The Swiss town of Montreux is also known for the annual music extravaganza, Montreux Jazz, held in early July.

This Alpine version of the Montreux Comedy Festival brings some alternative apres-ski to the usual stomping in ski boots.

"So far, there has been a really good vibe," says Tom.

The Alps are also now experiencing the best snow conditions they have had all season, so we cruise around the pistes together in the sunshine.

Tom tells me how living in the Tower of London was tricky for his social life as he used to have to navigate the moat to get in and out. Fortunately, he's now living in south London.

Not being sure if this was a joke or not, I soon discovered that his father, Sir Nicholas Houghton, is the former Chief of the Defence Staff of the British Armed Forces, and was made Constable of The Tower of London when he retired.

Tom has made fun of living there, and of the "British social elite" ever since. And this clearly ties in with the skiing scene.

Having been in the comedy industry for 16 years, Tom is now reaping some of the benefits. After the festival, he's jetting off to LA to wrap up filming on the Netflix reality show, The Circle.

Then he starts his second UK tour, "Absolute Shambles".

Class and skiing is a recurring theme for most of the acts of the British shows. For Tom, skiers are so "savagely upper middle class...they would grate a block of cheese with their teeth if you make them laugh".

For the comedian, and former Eton and Oxford student Ivo Greyham, losing his virginity 'late' at 21 is justified as "you don't start off going down a black run first".

At the other end of the spectrum, "working class" Elliot Steel, when asked "do you ski," replies he's been "sledging," assuming it's the same thing.

It's not the first time the resort has tested out comedy. A few years ago they held the "Let's Get Comedy" festival, featuring British comedian Paul Taylor, best known in France for his TV series on Canal+ "What's Up France?".

"We called it 'Let's Get Comedy" because the English found it difficult to say "Les Gets" (pronounced more like "lay jay"), explains Alexis Bongard, Tourism Manager in Les Gets.

Alexis came up with the idea for the festival because they needed more visitors in January, as "there are no European holidays".

"We have a lot of experience in sports organisation and ski events, so I thought it would be nice to organise something else, to mix skiing and culture."

After the success of "Let's Get Comedy" Alexis wanted to grow the brand quickly, "so that's the reason why I said we needed the main brand in Europe, and the main brand is Montreux Comedy."

As for Les Gets itself, now the snow has come there should be no shortage of visitors.

"It's a really beautiful and cool area. It's a part of the Portes du Soleil ski area, one of the largest in the world, with 15 connected ski resorts in two countries, France and Switzerland, that's not common."

"It's also a very beautiful village, with wood chalets, and lots of things to do. There's the après-ski, nice restaurants There's also the Alta Lumina, the first of its type in Europe."

Here you walk through the forest at night and you have a show with music and lights about a man who crossed the Alps in a hot air balloon".

Other cultural events on the slopes

Enjoy the first snows of the year and attend screenings of over 120 European films, all day long.

Rock the Pistes packs 35 concerts into one week, with open-air concerts on the slopes and après-ski concerts every evening in the resort villages. Babyshambles, Rag’n’Bone Man and The Klaxons are among the previous headliners.

Each winter Alta Badia celebrates its local culture and cuisine in a series of food-based festivals. It kicks off with Skisafari, a gastronomic tour on skis to taste gourmet dishes prepared by top chefs, followed by the “Sommelier on the slopes” where you can sampling of South Tyrol's finest wines in various participating ski huts.  Finally, in March the Roda dles Saus, is a gastronomic week dedicated to local Ladin cuisine (native to the Dolomite Mountains) with food prepared at mountain huts overlooking the snowy mountains.