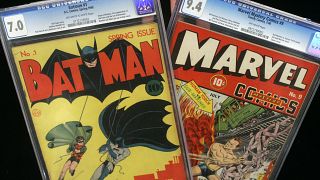 12 January: a big day for founding labels and organisations that would go on to have massive cultural impact.

The first example comes in 1939 when pulp magazine comic publisher Martin Goodman took note of the increasingly popular comic books and superhero titles and decided to set up his own comic book publication.

Goodman founded Timely Comics on this day 84 years ago. At the time, Stan Lee, probably the most famous name in comics and superheroes was still just 16 years old.

Based in the McGraw-Hill Building in Manhattan, Timely Comics went about putting together their first issue. It launched in October of that year under a name that would become synonymous with the entire medium: ‘Marvel Comics #1’.

In the first ever Marvel comic, the world saw the debut of The Human Torch, who’d go on to become a vital member of the superhero world through his membership of the Fantastic 4. Another showing came for anti-hero Namor, who has most recently been portrayed by Tenoch Huerta Mejía in 2022’s ‘Black Panther: Wakanda Forever’.

Two years later, in 1941, Goodman would hire his wife’s cousin Stan Lee, who would go on to create icons like Spiderman, the X-Men and Iron Man.

And the rest, as they say, is history.

Marvel Entertainment is now a multi-billion dollar company that is a division of the The Walt Disney Company and their 2019 film ‘Avengers: Endgame’ is the second highest grossing film of all time.

It wasn’t just Marvel that started out on this day in history.  January, 12 is also the day Berry Gordy Jr. chose to set up his recording company Motown in 1959.

Based out of Detroit, the label was named after the city’s nickname: Motor City. Gordy started one of the most successful black-owned enterprises in the history of America. The sheer success of the artists Gordy would go on to sign made the name of his label, Motown, a byword for an entire genre of soul music.

His first great success came with signing William (Smokey) Robinson, but his roster soon swelled to include now-legendary names like Marvin Gaye, Stevie Wonder, the Temptations and the Isley Brothers.

But it was with The Supremes that Motown truly blew the charts away. Led by Diana Ross, they were the second most successful group of the 60s in the US, only surpassed by The Beatles.

Motown would continue to impress through the 70s with acts like The Jackson 5, but by the 80s, Gordy’s label would start to falter. Yet, his sound and his influence remains indelible on music history.

And finally, in more superhero history, 12 January 1966 was the day the live-action TV series ‘Batman’ debuted for American audiences.

Adam West’s camp depiction of the caped crusader isn’t exactly in line with the modern moody approaches of Robert Pattinson or Christian Bale, but I dare anyone to go back and watch episodes or even the 1966 movie and not see the sheer brilliance of West’s vaudeville act.