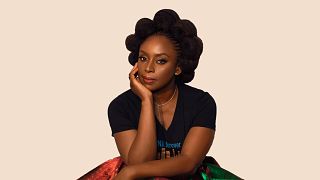 When the internationally renowned Nigerian writer Chimamanda Ngozi Adichie usually speaks the world sits up and pays attention. Or at least if it doesn't it probably should. Especially the people and practices she chooses to target for criticism. Whisper it loudly, this time she's focusing her fire on men.

Best known for her writings on politics, race, culture and gender, her novels and stories include Purple  Hibiscus, Notes on Grief, Half of a Yellow Sun and Americanah

Speaking in Brussels last week at the annual Friends of Europe political conference about the state of Europe, she called for more gender empowerment and more gender equality across the globe.

"In the world today, we have so much more information but so much less knowledge," she said.

"We tell men what not to do, but we don't really tell them what to do - such as maybe telling them to speak up more on women issues with other men because the fact is that men listen to men, and men take men more seriously than women.

After her talk, she spoke to Euronews Culture's Méabh Mc Mahon about what cultural impact that is having on policy making, the war in Ukraine and the EU's approach and attitude when dealing with Africa.

"Obviously I'm generalising, but we have to work with generalisations. So, there are, of course, men who take women seriously. But I think in general, culturally, men listen to men more than they listen to women. Men are more likely to take other men seriously. And the reason that I think it matters and the reason I think we should talk about it and hopefully try and make it stop is that it has serious consequences for women, women who want to be in politics, for example, that it then becomes easier to dismiss them, for example.

And, you know, I was also talking about how very often today we say something is bad and we end there. And I think maybe we should think about starting to say something is bad, but here's how it can be better. So, I think, you know, with the MeToo movement, for example, which I think was a very hopeful thing because women were finally telling their stories and women were finally being believed, which was new.

We were rightly saying that men should not do, but we were not saying what men should do. And I think that's important. So, when people say things like, well, men feel adrift in this new age and it can sometimes feel as though it's an excuse for men and that we're saying, oh, because you are no longer in some sort of exclusive grip of controlling everything, you're adrift. But maybe it's that we're not saying here's what you should do instead of, you know, doing that to this. And so, it's the kind of conversations that I'm interested in."

Euronews Culture:  And what would you whisper in their ear? What should they do?

Chimamanda Ngozi Adichie: "Well, first of all, I would ask other women in different situations what they think men should do. That's the first thing I would do. And the second thing is, I would then suggest that men listen a bit more. I think listening is a skill."

Euronews Culture: How can we get more women around the table, whether that's in politics or in the boardroom?

Chimamanda Ngozi Adichie: "I think quotas are a good thing. I think they should be done with new ones. But I think quotas are a good thing. You know, I was reading a report about how even the way that jobs are advertised can be quite gendered, so that in general, women see certain words and job advertisements and feel that it's not for them. So, I think a certain level of sensitivity to language is important. I think representation is important. Having one woman be in a position, makes other women realise what's possible."

Euronews Culture: We're here in Brussels at a European conference. Do you have any tips for those running the European Union or how to make Europe more diverse, make it more reflective of real European society and not just an exclusive elite club?

Euronews Culture: And is it doing a good job?

Chimamanda Ngozi Adichie:"No, not particularly. I think that there's a lot of lip service paid to Africa, but very little action. And there's still often a condescension in the way that Africa is talked about or the way that Africa is engaged with. I was reading something about how a lot of people in the EU, in positions of power were very upset because many African countries did not vote with them along the same lines concerning Ukraine and Russia. And, you know, it's almost as though it's the sort of paternalistic thing where we voted this way, you should feel the same way without asking or thinking about considering where the African countries are coming from, because everybody has their own particular concerns and so this idea that somehow Africans are not allowed to have their own opinions is just so, it's almost, it's very regressive. It's sort of almost colonial."

Euronews Culture: Ukraine has been the main story we're following this year and the welcome that Ukrainians got in Europe. But we also spoke to a lot of people of African descent who fled Ukraine who were mistreated. How did that make you feel?

Chimamanda Ngozi Adichie: "Terrible. And I think we should call things what they are. It was racist. It was anti-black racism, anti-Africanracism. And I think it shows us that the complexity of a situation that even people who are being oppressed can themselves be oppressors. And I felt quite sad in some ways because, I don't know, I was kind of surprised by it. I don't know why I should have been surprised, but I was, and I felt really bad for those students.

Euronews Culture: And what about you? What's coming out next? Any books on the way?

Chimamanda Ngozi Adichie: I cannot tell you because I am superstitious.

Euronews Culture: Ok! Well, we do look forward to them. I am a big fan of your books. And finally, how are you changing the world or opening minds and changing attitudes through your books?

**Chimamanda Ngozi Adichie:**I hope I am! You know, one of the things that makes me happiest is when someone says to me, I read your book and I started thinking differently about something. It just makes me so happy because, you know, I think to myself, this is the reason I write. You know, this is why writing is my vocation. Because, you know, obviously, I love writing. I think that it's a gift that I was given. But the thing that makes me happiest is to know that somebody else connected to what I wrote and that it made them think differently. So, I hope that it makes people be more aware of the complexities of Nigeria and of Africa - makes people think about women and the diverse range of possibilities for women, that sort of thing.

Euronews Culture: And in your case, it's not just somebody, it is millions of people around the world.

EU's priorities in Africa should be the same as in Europe, says MEP