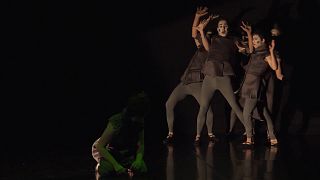 The France-Portugal 2022 Season has produced and presented over 200 artistic projects between the two countries.

One of them was led by the dancers from the Portuguese company Dançando com a Diferença (Dancing with the Difference).

"It's an inclusive company, there are people with disabilities and people without disabilities. But it's a professional company. My challenge was no different than with the other companies. It's using each interpreter with what they have, which is what I always do with all the interpreters.

The interpreters are all different, they all have their own abilities or disabilities. In this case, I found these interpreters very inspiring. They are very creative by nature." Says choreographer, Tânia Carvalho.

The creative expressions of the season have taken many varied forms. A good example of this is "Une Chambre en Ville", an installation in which Ana Jotta recreates an intimate space in a flat that is about to be demolished.

"I don't like exhibiting in general, especially after a certain number of years of work, I don't like exhibiting in galleries. And so I have this possibility. I am installed in a flat that I have furnished and decorated. This is what I have done here in the "Chambre en Ville", (A Room In Town). I was given the possibility to do this. It's something that I like". Explains artist, Ana Jotta.

Emmanuel Demarcy-Mota, the President of the France-Portugal 2022 Season, describes the close historical ties between the two nations.

​"These two countries have a common past, a very strong relationship, cultural, but also friendly, also linked in history as a consequence of the dictatorship. There were many Portuguese exiled in FrancetoToday in 2022, this season, with more than 50 (participating) cities in Portugal and 80 (participating) cities in France, has allowed us to see where we stand. It is an exceptional moment."

One of the many benefits of collaboration is the increasing circulation of creative artists between the two countries. This is the case of Tiago Rodrigues, who will direct the Avignon Festival and brought several of his plays to France during this season.

In Cinema, there was an opportunity to discover or revisit new talents, such as film director, Sofia Bost.

"I am here at the French Cinematheque in Paris. And my film is part of a session of short films by young Portuguese directors. It's an incredible opportunity to show the new Portuguese cinema."

The Portuguese company, Dançando com a Diferença, Ana Jotta's installation, and four plays by Tiago Rodrigues are also all part of the Festival d'Automne à Paris.