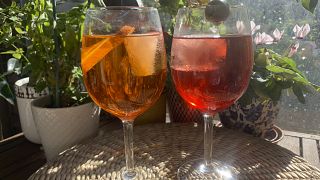 In and around Venice alone, an estimated 300,000 spritzes are served every day, in different and constantly developing recipes and variations.

The Italian-born Spritz, originally served as an aperitif, is today most commonly made with prosecco, bitter liqueur, and an all-important dash of soda water.

It originates in the mid-19th century, during the time of the Austro-Hungarian Empire. It's believed that some Austrian soldiers in Venice found Italian wines too heavy, so would ask the bartender for a "spritzen" -- or splash -- of soda water to dilute them. That became the first spritz recipe.

"In the beginning, aperitifs -- like vermouth and rosoli and all other mostly Italian drinks and liqueurs -- were usually consumed alone. As an aperitif, yes, but on their own perhaps with a little ice or soda, to dilute them a bit. And then, after the 1950s, people started mixing them and recognising them as cocktail ingredients," said Rudi Carraro, brand ambassador for Select aperitivo.

But it was during the turn of the millennium that Spritz fever developed into a global phenomenon. In 2014, Aperol announced an official partnership with one of the most successful football teams in the world, Manchester United.

According to the International Wines and Spirits Record report, sales of aperitifs -- including the spritz -- grew in volume globally by 26% in 2021 compared to the previous year.

The spritz appears to have played a key role in that rise. Linda Passarella, director of global aperitifs at Campari Group, which also owns Aperol, says the spritz is light in alcohol "in line with the emerging trend" of lower-alcohol drinks.

As consumer tastes continue to shift, the rest of the world is learning more about Italian aperitifs and is experimenting more with those flavours.

Is this Spain's most disruptive bartender?

A London bar serving cocktails for humans and their dogs