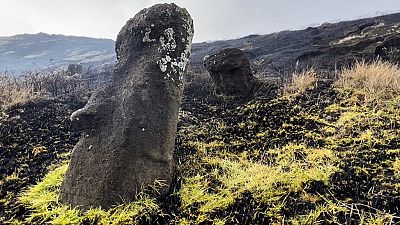 A forest fire that tore through part of Easter Island has charred some of its famous monumental carved stone figures, known as moai.

100 hectares of land have been razed by the flames, with the area around the Rano Raraku volcano, a UNESCO World Heritage Site, reportedly being the most affected.

An estimated several hundred moai are in that area, as well as in the quarry where the stone used to carve the sculptures is extracted.

The disaster comes comes just three months after the island was reopened to tourism on 5 August, after two years of closure due to COVID-19.

What are the moai?

The moai figures on Easter Island are some of the world's most famous and recognisable monolithic statues.

They were carved more than 500 years ago by the indigenous Rapa Nui people, as a way to embody the spirit of their prominent ancestors. The megaliths on the island generally stand at about 4m (13ft) high and feature hidden torsos, buried beneath the earth.

The moai face away from the ocean and instead towards the villages, as if to watch over its natives.

However, the seven Ahu Akivi figures face out to sea, which is believed to help visitors find the island.

In 1868, a moai figure known as Hoa Hakananai'a was taken from the island and given to Queen Victoria, who passed it onto the British Museum.

In 2018, the Chilean government and the island's authorities requested it be returned.

The governor of the island, Tarita Alarcon Rapu, reportedly said at the time: "We are just a body. You, the British people, have our soul."

She also commented that her grandmother, who passed away at the age of 90 years, never had the chance to see her ancestor.

The Hoa Hakananai'a is still on display at the British Museum despite the long-standing calls for it to be repatriated.

Check out the video above to see the damange inflicted by the forest fires.

Is Britain finally ready to share the Parthenon Marbles with Greece?