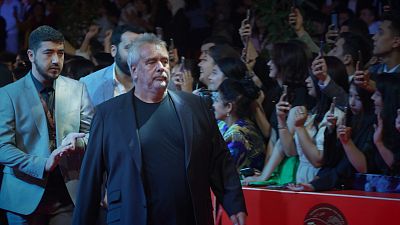 Following its return last year after a long break, the best of central Asian cinema once again hit the red carpet at this year’s Tashkent International Film Festival, with some 300 artists and guests from dozens of countries.

Uzbekistan might not be the first place one looks on the map when it comes to the movie industry. But, for those in the business, the country is increasingly a hotbed of cinematic talent.

"This is a very famous festival—the Pearl of the Silk Road. I love to be somewhere like this because I think these are the places where you find undiscovered stories, you know that we haven’t been exposed to so much. So it sort of has a wonderful energy," says Gabrielle Kelly, chair of the jury and filmmaker.

One of the festival’s most unique highlights is the Grand Prix. Aimed specifically at fledgling filmmakers, all of the competing short films are shot across Uzbekistan in just five days.

This year’s top prize went to Uzbek director, actor and writer Timur Murodov, whose film Casseta centres around an old man who lives alone and is forced to adapt to modern life.

That fostering of young creative talent was recurring throughout the festival.

With 60 masterclasses over several days, including one by French film director Luc Besson, the festival’s goal is to maximise the experience and know-how on offer.

"We create a big platform for educational programmes for youth,” says Firdavs Abdukhaliko, film producer and the director of the festival. “All our guests who are coming here from all around the world. We ask them to teach and give seminars, masterclasses and training. This is important as these are the young moviemakers producing Uzbekistan’s films for tomorrow."

Set for release in 2024 it’s a tale of a donkey who dreams of a quiet life yet finds himself caught up in the adventures of the folkloric character Hodja Nasreddin.

Bekmambetov says the country is on the right path in the world of cinema.

"Uzbekistan is historically a crossroads from China to Europe to Iran to Russia and the Uzbek people they have special skills to welcome. Cinema has an important mission to unite people, to unite cultures and in today’s world it’s really important."

Hodja is just one of around 30 regional co-productions the festival is helping bring to life.

Bit by bit, the Tashkent International Film Festival aims to boost both Uzbekistan’s and the wider region’s flourishing film industry.

Watch the video report in the player above.